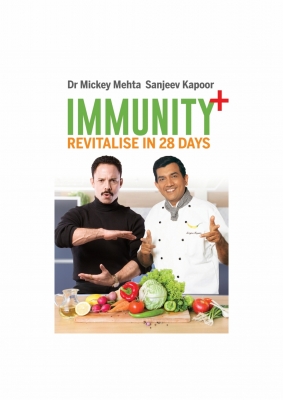 New Delh– An upcoming book on health and immunity in light of the COVID-19 pandemic has been penned by holistic health guru and corporate life coach Mickey Mehta and renowned chef Sanjeev Kapoor, and is slated to launch later September. Titled ‘Immunity Plus’, it provides the groundwork to build your personal immunity, as well as adding to the immunity of the world.

The book, to be published by Harper Collins, broadly covers six topics, Mehta tells IANSlife. “The fundamentals of correct breathing techniques; Workouts; Nutrition; Rest & Recuperation; Sensible natural Supplementation; and Cosmic Nutrition, which is the inclusion of the five elements of the Earth, Air, Water, Sky, and Fire ‘The Panchmahabhootas’ of Yogic science. It’s proven that belief can change your biology. I say that breathing can change your hormonology; meditation and prayers can change your emotions and psychology; and faith can change your physiology.”

He says: Coupled with clean, natural and green eating, and various forms of exercising, the book has a four-week program. Each week has its own planned schedule of nutrition, workouts, meditation, prayers and philosophy lessons.

“Sanjeev Kapoor, the global Super Chef, who has co-authored the book, has added lots on the immunity from the perspective of nutritious foods. The book is a Bible not simply for weight-loss and fitness, but rather for building and upholding a supreme invincible immunity.”

What prompted the authors to write the book?

“The Covid-19 breakout in early 2019 was the turning point for the book’s inception. The pandemic’s wildfire, which sprung and spread from China and affected millions worldwide, prompted me to take a major step towards raising people’s awareness about physical and psychological wellness , fitness and immunity.

“However, the seed was laid even long before, when, seeing the generic world model of bad lifestyles and rising life-threatening diseases, I commenced a research paper on immunity in conjunction with Dr. Ali Irani of Nanavati Hospital, Mumbai. So, around the initiation of the pandemic, I thought to come up with a book version of my research to benefit mankind; and thus ‘Immunity Plus’ was born,” shares Mehta, who has previously written ‘The Shoonyam Quotient’.

After reading and following the book, as one starts behaving in a much disciplined way, alters one’s lifestyle and outlook appropriately towards fitness and wellness — One would begin to lead by example. You would transform other people around you, who start seeing you beginning to enjoy the benefits of good health: a radiant smile; confident and fit aura, and high energy level throughout the day, he concludes. (IANS)