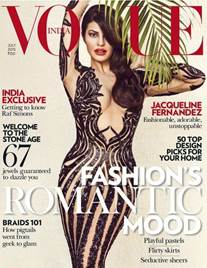 There have been a number of Indian actresses of late who have forayed into Hollywood and other international projects. One such example is megastar Jacqueline Fernandez – one of India’s most bankable actresses with a string of blockbusters to her acting repertoire.

Of Bahraini, Malaysian and Sri Lankan origin, Jacqueline is a youth icon and has been chosen to represent a number of international brands – from Puma to Body Shop to Tresseme.

Furthermore, given her social media reach of over 30mn+ followers, Jacqueline is the first port of call for a number of projects campaigning for major social causes including climate change, good health, environment and girl and woman empowerment.

Jacqueline has worked with British chef and campaigner Jamie Oliver to launch Food Revolution Day in India, which aims to raise awareness of the double nutrition burden – under and over-nutrition – affecting children worldwide.

Jacqueline most recently featured in the iconic girl power short ad film of the century #WhatIReallyReallyWant, which broke the internet with over 150 mn views on Facebook when it launched in July to mark the 20th anniversary of the Spice Girls video Wannabe. She was one of the Spice Girls in the India portion of the film, which was produced by filmmaker and charity campaigner Richard Curtis’ organisation Project Everyone, in partnership with Getty Images and SAWA. The film set out to raise awareness of the UN’s Global Goals agreed upon by 193 World Leaders – if met we can eradicate global poverty, reduce inequalities and tackle climate change by 2030. But we can only achieve this if we include the most marginalised communities in the world, including girls and women.

Jacqueline is an active campaigner for a number of conservation projects. She is the India face of UN Environment’s Wild For Life campaign, which aims to combat illegal wildlife trafficking alongside Gisele Bundchen and Yaya Touréand. She also supports Habitat for Humanity and elephant rehabilitation campaigns. In addition to this, her own campaign, ‘Jacqueline Builds’ she raised funds for the victims of severe floods that hit South India in 2015.

It’d be great to know if you would be interested in speaking to Jacqueline regarding her international projects especially the hugely successful #WhatIReallyReallyWant film as we’d be happy to arrange an interview for you.

Jacqueline also has a number of exciting projects coming. Among these are a superhero film titled The Flying Jatt which is based on climate change themes, and According to Mathew, an upcoming film based on the crimes of Father Mathew Pieris, Anglican priest of the Church of St Paul the Apostle, Kynsey Road, Colombo, who was convicted of the double murders of his wife ( Eunice Pieris) and Russel Ingram, the husband of his lover in 1979.