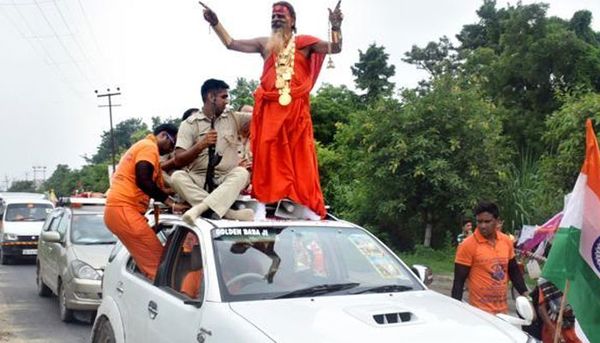 Ghaziabad– He’s different — bedecked with 12 kg gold ornaments, guarded by 25 security guards and travelling in a motorcade of 17 vehicles. And he’s a ‘kanwaria’ — a devotee of Lord Shiva, carrying a ‘kanwad’ of the holy Ganga water on his shoulder. Meet Sudhir Kumar Makkar of Gandhi Nagar in Delhi who joined hundreds of other devotees at Kadrabad town.

Makkar, also known as “Golden Baba”, entered the town on Thursday night with his motorcade of sleek sedans along with 300 followers. This is his 24th “kanwad yatra” — he has been participating in the annual ritual for years.

Decorated with eight gold rings, 15 gold chains, two bracelets in each hand, two bajuband on his arms, Makkar looks content with his life.

Educated in a gurukul at Jwalapur near Haridwar, Makkar returned to Delhi after eight years of studies.

Speaking to IANS he recalled his life so far, saying that over the years he has committed “several sins” and that’s the reason why he carries the ‘kanwad’ every year. And he’d continue to do so as long he is alive, Makkar said.

Once he traded in ready-made garments. Now Makkar is into real estate business.

In 2006, he met Mahant Mahendra Puri of Juna Akhara and considers him to be his Guru. Ever since he received a gold chain from the Guru, Makkar’s business has been flourishing. So is his devotion. And his love for gold and ornaments.

In the process, he’s added some golden glitz to his life. Last year, he had worn 11 kg of gold. This year the weight of the yellow metal he is wearing stands at 12 kg as of now.

And the ‘Golden Baba’ is all set to wear a gold jacket on the Shiv Ratri.

A devout follower of Lord Shiva — one of the eternal Trinity of HIndu gods Brahma, Vishnu and Mahesh — Makkar said it is the Lord who has endowed him with all the wealth. It’s the result of his devotion — Makkar regularly brings the holy water of the Ganga river for the deity.

This year Makkar began his ‘kanwar yatra’ on July 24 from Haridwar. It would conclude in Delhi on July 31.

His entourage includes cars of different types — from Audi, Innova, Fortuner, Scorpios to Qualis. Besides, there are three trucks, five tempos and an ambulance. The team also includes 25 personal helpers, and 300 kanwarias.