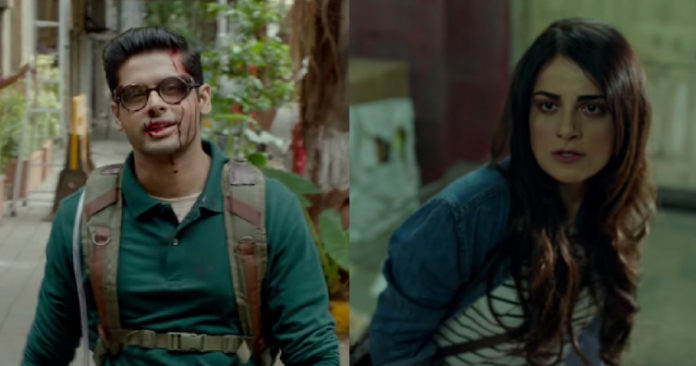 Toronto–Abhimanyu Dassani, who has created a buzz for his debut movie “Mard Ko Dard Nahi Hota”, was the star at the films presentation at the “Midnight Madness” segment of the Toronto International Film Festival (TIFF) here.

Not an out-and-out Bollywood masala movie, it is a fantasy thriller whose protagonist aims to test the idea of masculinity to the utmost by taking on 100 opponents in martial arts because he is born with the ability to feel no pain.

Son of famous actress Bhagyashree and Himalaya, Abhimanyu doesn’t disappoint in the lead role this film directed by Vasan Bala.

“I had six kilo more weight while doing the film than I have today. Before the film, I trained for eight months for six hours every day in martial arts, yoga, swimming, stick fighting and meditation,” the actor said before the film’s screening on Friday night.

“I used to eat six big meals every day to put on weight.”

“I also spent three months in isolation before the shooting because my character Surya doesn’t speak to anyone. It helped me a lot. Surya is socially awkward, but he is confident. The isolation led me to have a lot of introspection about myself and my character,” the 28-year-old actor added.

Before films, Abhimanyu was a serial entrepreneur as his famous parents didn’t want him to enter the entertainment industry because of its uncertainty.

“I have been a serial entrepreneur since 16 and have worked with many people. Then I discussed the idea of trying entrepreneurship in films also. I went to New York to study filmmaking, but I soon realised that it was the acting that I liked the most,” he said.

He said he didn’t know director Vasan Bala when he went to audition for this film.

“One day in 2016, someone tweeted me a screenshot about an upcoming film requiring a martial arts actor. I set up a martial arts centre with 50 students to be trained by Vikas Barua. I went to audition for this film. I didn’t know Vasan Sir. I got no chance for audition on the first, second and third day. On the fifth day, Vasan Sir called me and I went through auditions for 30 days before I was selected for this role.”

How challenging was this physical role since he had to internalize so much about his character Surya who doesn’t speak or emote?

“Vasan Sir trusted me and it empowered me,” the actor replied.

“I have grown up watching Govinda. Those are the kind of films I want to do. But I am open to any kind of films. Bollywood, regional cinema, Netflix, and in any role – lead or five minutes or whatever.”

“Mard Ko Dard Nahi Hota”, which features actress Radhika Madan opposite Abhimanyu, was shot in Mumbai over a period of 55 days.