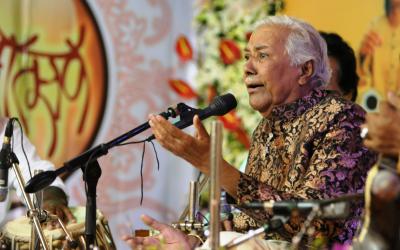 Melody queen Lata Mangeshkar on Sunday tweeted a photo of Ghulam Mustafa Khan and expressed grief over his demise. She said he was not only a great singer but also a great human being.

A.R.Rahman wrote,”The sweetest teacher of all… May the Ghafoor-ur-Rahim give you a special place in the next world #UstadGhulamMustafa.”

Filmmaker Hansal Mehta called the late legendary musician as his teacher. “My teacher. Guru to a student who just wouldn’t stay on. Great teacher. Great artist. Hindustani Classical music has been bereaved. His students have been orphaned. I have been orphaned. RIP Ustad Ghulam Mustafa Khan Saab. Stay strong brothers Murtuza, Qadir and Rabbani.”

Popular Sarod player Amjad Ali Khan was also left “very saddened” to know about the demise of Ustad Ghulam Mustafa Khan. “He was one of the most respected and versatile vocalists of our country. His musical legacy lives on forever! My deepest condolences to his family. May his soul rest in peace”.

Singer-composer Salim Merchant tweeted a photo with the legendary artiste and wrote, “Inna Lillahi wa inna ilayhi raji’un. Ustad Ghulam Mustafa Khan is no more. He was awarded the Padma Shri in 1991, Padma Bhushan in 2006 and Padma Vibhushan in 2018. I’m fortunate to have spent time with him and also share my birthday with the legend. Condolences to his family.”

Singer Harshdeep Kaur called him a “gentle soul and a legendary artiste”. She considers his death to be a “huge loss to our music fraternity”.

The last rites with state honours would be performed at Mumbai’s SantaCruz (west) Kabristan later in the evening. (IANS)