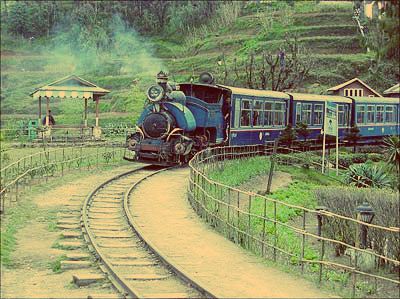 Nagpur–The old world magic and excitement of travelling leisurely by trains on narrow gauge railway lines, is fast becoming a thing of the past world over, including India.

Now, the last surviving narrow gauge line, running 106 km between Itwari-Nagbhid near Nagpur on the South East Central Railway (SECR), will also become a part of world rail history, within a year or so.

Probably, Bollywood contributed a lot to popularise the romance of the narrow gauge trains, featuring them in several memorable film songs.

Nagpur to Nagbhid, which was the original route of the narrow gauge railway line, essentially served as the lifeline of the people in the erstwhile Central Province of British India.

The line itself was born out of an emergency during the Great Indian Famine of 1876-1878, when the Bengal-Nagpur Railway announced its construction, later known as Satpura Railway network, to save the lives of people dying of hunger in the remote and inaccessible parts of central India.

“This project will cost around Rs 1,400 crore with the Indian Railways and MRIDC – the executing authority – sharing the amount equally (50 per cent each),” a SECR spokesperson told IANS.

Local villagers and farmers commuting for employment or trade to Nagpur had to take the road route which was more expensive and time-consuming in the absence of poor rail connectivity.

The conversion proposal was first announced in 2014 at a cost of Rs 350 crore, which has now increased to Rs 1,400 crore owing to various delays and the Centre’s decision to combine it with the electrification project of this route.

Other erstwhile narrow gauge lines in the region included Nagpur-Chhindwara, Chhindwara-Nainpur, Nainpur-Mandla Fort and Balaghat-Nainpur-Jabalpur sections which ended between October-November 2015.

A total of 53 trains were operated on the narrow gauge lines which have now been either converted or nearing completion of conversion into broad gauge with high-speed express trains ferrying thousands of passengers daily.

A majority of the narrow gauge lines in Central India are very old and were constructed in the 19th-20th century, mainly to tackle the famine by supplying foodgrains, carry farm and forest produce and provide employment to locals, said a MRIDC official.

At that time, over 1,000 kms of the narrow gauge lines criss-crossed the country’s landscape, but that has now come down to just the final 106 km, the official said.

Later, they contributed to the national economy by way of carrying products from the different mines located in the region to far away manufacturing or marketing centres.

According to the Indian Railways, in 2017, a little over 2,000 km of narrow gauge railway lines were still operational in the country, providing rail connectivity to some of the remotest regions, but accounting for barely 2 percent of the railway network.

The Matheran Hill Railway runs between Neral-Matheran (in Raigad, adjacent to Mumbai, Asia’s only “automobile-free” hill station), the Nilgiri Mountain Railway links Coonnoor and Ooty, the Darjeeling Himalayan Railway connects Jalpaiguri to Darjeeling, and the Kalka-Shimla Railway joins the two towns in Haryana and Himachal Pradesh.

While Matheran Hill Railway figures on the UNESCO’s tentative world heritage list, the other three have been designated as “UNESCO World Heritage Sites” over the past few years.