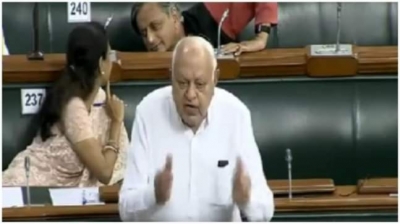 In an earlier tweet, Tharoor said that Sule was asking him a policy question and he leaned over to hear her as she was speaking softly so as not to disturb the debate.

“For all those who’ve been enjoying themselves at @supriyaSule’s & my expense over our brief exchange in the Lok Sabha, she was asking me a policy question because she was about to speak next. She was speaking softly so as not to disturb FarooqSahib, so i leaned over to hear her,” Tharoor said in his first tweet.

The video clip is from Tuesday’s Lok Sabha proceedings when a short-duration discussion was held in the Lower House on the ‘Situation in Ukraine’ and National Conference leader Farooq Abdullah was speaking on the subject. (IANS)