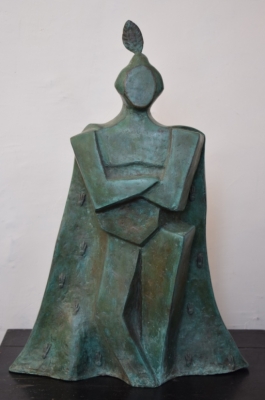 New Delhi– The third chapter of the sculpture show titled ‘iSculpt for Delhi’ featuring works by 20 artists that opened in the national capital recently has transformed the Gandhi King Plaza at IIC into a sculpture court.

A number of artists, in their involvement with the environment and the place, have created works that are born of an ecological echo.

‘Heaven and Earth’, a monumental elephant with pots, is Neeraj Gupta’s ode to the elephant which stands as an endangered species. Gupta extols the beauty of the gentle giant and its place in the habitat with this majestic sculpture. The show, presented by the Delhi Art Society, is curated by art critic Uma Nair and will continue till December 18.

An ode to the environment is Satish Gupta’s ‘Conference of the Birds’, an elegy to the 5,000-year-old Sufi poem that spoke of finding truth amid hardships in the dialogues between two birds. Linking the ecological system in many ways and telling us the importance and imperative role of trees in the world is Dhannanjay Singh’s ‘Man and the Tree’ as well as a ceramic artist and National Award Winner Keshari Nandan’s ‘Tree of Life’.

Taking us beyond the context of nature and man is Rahul Modak’s ‘Monumenta1’ that holds terracotta leaves with a holistic pillar in the intensity of leaves of time and decay, and death and despair.

National award winner Arun Pandit’s ‘Head’ is an amalgam of pathos and pain. Pandit has merged man’s role in the world of technological advances with his work that makes us think of Errors and multiplicity. Yet another head of a different dimension is the marble head of Parmod K Mann entitled ‘Nymph’ which is a beauty to behold for its prismatic brilliance. In fibreglass and quaint is the head of Rakesh Kumar Gupta’s made of fibreglass. Bhola Kumar creates another large head done in stone which has a primitive aura in expression and compositional contours.

Hexagram Origami artist Ankon Mitra shares ‘Fountain of Folds’ for this show. Mitra shares a unique vision of a universe forming and dissolving from acts of folding. To him, the ancient art of Origami is not only a child’s craft but a cutting edge cross-disciplinary technique that is being deployed by robotic engineers, space scientists, biotech researchers, mathematicians, computation experts, botanists, architects and artists to create solutions for the real world in the 21st Century.

Biman Bihari Das has Lord Buddha created in bronze which brings in an aura of deep spirituality and tranquillity. Rita Datta’s ‘Madhav’ is a veneration of Lord Krishna in bronze. The cape with the alphabet Om is every bit a work of deep contemplative idioms. Seema Kohli’s sculpture ‘Riding the Waves of Wind and Water’ is yet another meditative work. Kohli’s work will connect with the master Atul Sinha’s rosewood masterpiece Aradhak (Worshipper ) which reflects a universal aesthetic.

“At the Gandhi King Plaza, the configuration between sculpture and the space it inhabits and shares with the viewer will contribute to this sensation. Sculpture should always be understood as having been placed and should be read in relation to the area it occupies. An exhibition is always a testing ground, an integral space for both the viewer and the artwork,” said curator Uma Nair. (IANS)