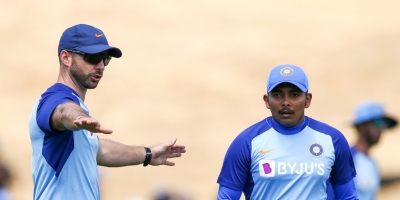 Dubai– Nick Webb, the strength and conditioning coach of the Indian cricket team, said on Thursday that he will be leaving the post after the mens T20 World Cup in the UAE. Through a LinkediIn post on Thursday, Webb has recently informed the Board of Control for Cricket in India (BCCI) that he will not extend his contract after the mega event ends.

Webb had taken over as the strength and conditioning coach in September 2019, ahead of other candidates Luke Woodhouse and Rajnikanth Sivagnanam. Webb replaced Shankar Basu, whose stint ended after the 2019 Cricket World Cup in England. He had also served as strength and conditioning coach of New Zealand women’s team and domestic side Central Districts apart from rugby side Vodafone Warriors.

“For the past 2 + years I have had the privilege and honour of representing India, the BCCI and Team India. We have achieved and grown a lot as a team during this time. As a team we created history, we won matches and we lost matches. But how we continually responded and adapted in the face of many challenges along with everyone’s willingness to compete every single day are things that make this team special. In saying this, I have recently informed the BCCI that I will not be seeking an extension of my contract following the T20 World Cup,” wrote Webb on his LinkedIn page.

Webb has cited the ongoing Covid-19 restrictions in entering his home country New Zealand as one of the reasons for not seeking an extension. “This has not been an easy decision but ultimately I must put my family first. The current Covid restrictions for New Zealand citizens wanting to enter NZ is the primary reason. While these restrictions may ease in the future, the uncertainty of this happening moving forward along with potential 5-8 month stints at a time away from my family has made it unsustainable for me past the T20 World Cup.”

“I am not sure what the future holds for me at the moment but I remain excited. One thing I’m certain of is that I will be doing everything I can to guide our @indiancricketteam men to the big dance at the T20 World Cup. We are #inittowinit. Thanks for all of your support, I appreciate all of you,” concluded Webb.

India will begin their men’s T20 World Cup campaign in Super 12 in a high-stakes clash against Pakistan in Dubai on October 24.(IANS)