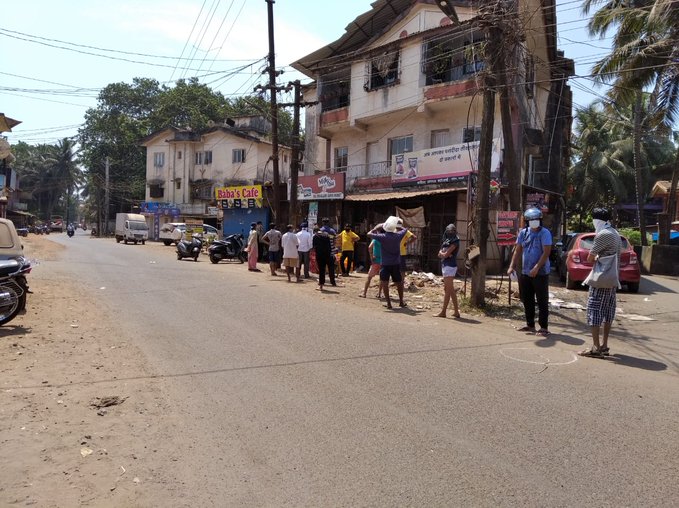 Prime Minister Narendra Modis expected announcement of an extension of the lockdown, till May 3 this time, reflected three important strands of the Centres policy of combating corona virus. First, it was rightly decided that the strategy of dealing with the pandemic had to be determined at the national level — by the Union government — which was implementing the mandate of the Constitution to act for ethe people of India , in consultation with the states. Secondly, on an examination of what was happening across the globe, the lockdown in India, with esocial distancing at its root, was deemed to have yielded a huge benefit for the country and therefore a period of 40 days recommended by our experts initially for evaluating the complete play of the corona virus, was apparently accepted as the right recipe taking into account the rise in the number of reported cases in some parts of the country. And third, a possible opening up of agriculture, industrial, infrastructure, oil production and IT sectors where esocial distancing norms could be followed more easily — along with free movement of goods across the states — could, according to policy makers, wait for at least one more week to avoid risks.

The Prime Minister emphasised that the lockdown had to be followed rigorously — there was a hint in his address of his disapproval of violations that had come to notice — and cautiously offered to review the situation in the light of the scientific study of the eregionalised’ spread and the erate of incidence’ of the contagion in different areas, carried out by our medical researchers. Territory-wise monitoring and grading seems to be the mantra for defining enforcement norms for the future. Only 170 districts of India so far have been found to be having hotspots — a large number of these had Tablighi Jamaat linkages.

Pending the discovery of a vaccine the mitigation attempt has had to rely on a mathematical analysis of the pattern of movement of the virus — which is a enon living’ but free floating protein molecule capable of mutating and multiplying like an organism on finding contact with a vulnerable human body. Nowhere else was esocial distancing’ understood so well and used as the chief weapon to defeat the virus so effectively as was the case during the Indian lockdown. Prime Minister Modi’s leadership has been tested both for his decisiveness and his ability to get a vast country like India — with its socio-cultural and economic diversities — to conform to the unprecedented dos and don’ts of a prolonged lockdown. The people of India, on their part, generally responded with a sense of awareness and self- discipline — the tremendous contribution of eneighbourhoods’ and RWAs on one side and the villages on the other must be specially mentioned. People’s innate sense of national unity always came to the fore in a situation of ewar’ or natural disaster and that is how, despite the rigours of the lockdown, innumerable philanthropic groups and organisations, big and small, created a food chain for the needy and the dislocated- making sure that eno one would go hungry’ in this land.

The lockdown is inevitably causing greater distress to the poor and the weak. The Prime Minister has counselled the employers to be econsiderate’ towards the employees during this period — the Centre had already suggested that industry, commercial establishments and shops must continue to pay wages to the employees during the lockdown. Evidently, there is lack of compliance in this regard. Migrant labour, unregistered daily wage earners and employees engaged by exploitative contractors are part of the socio- economic life in India. It is squarely the responsibility of the state administration concerned to find ways of feeding and sheltering them at a time when they had no work and to convince them that elockdown was not lockup’. The total number of people in dire distress can sometimes grow large enough to create potential for law and order situations — particularly if there was a possibility of agents provocateurs spreading false rumours. The states, who were free to seek help from the Centre’s Relief Fund, would have to micro- manage this problem on a district-wise basis in a fail-safe manner. Various ministries of the Government of India, functioning overtime and coordinating work on multiple fronts under the constant guidance of PMO, have performed very well indeed. The crucial role of Ministry of Health in framing policy responses that were in consonance with the assessments of our medical researchers and experts stood out and so did the combined effort of MHA and the Cabinet Secretary to get the states on board for implementation of the corona-related decisions of the Centre that had touched every aspect of national life.

A few cases of local institutions and authorities behaving in total disregard of the letter and spirit of the mandate of lockdown have attracted public notice. In a shocking event in Bihar, a young couple based in a village had rushed their three-year-old son suffering from fever to the government hospital at Jehanabad which advised shifting of the patient to Patna Medical College Hospital but did not allow the use of its ambulance for that emergency travel. The parents did not know what to do and the boy died in the lap of the grieving mother left out in the open. Did this happen because the parents were eordinary folks’? Or, was the cost for the hospital being factored in? Or, quite simply, the ambulance was not functional? The angle of an avoidable human tragedy apart, this case has potentially hurt the cause of internal stability by weakening people’s faith in the government. The Centre may consider using Art 311(2)(c) of the Constitution against the manager concerned, through the intervention of the Governor.

In another case, the murky side of socio-economic power — its misuse for defying the lockdown protocols — came to light in Maharashtra where a set of super rich families were able to blatantly travel in a large convoy of swanky cars to a hill station on authorisation secured from a top state official. It is coming out that political patronage was in play here. The message that this gave to the people at large was that individuals could flaunt money and einfluence’ to show how they were above the directives issued by the state for the larger national good. Another instance of a VIP flaunting his position came from Karnataka — here a Minister tweeted his picture with family in a swimming pool, along with a sarcastic comment on esocial distancing’. The Centre would surely like to send down a strong message against this kind of administrative impropriety.

The corona pandemic etoo will pass’ but will surely make a lasting impact on systems of governance, business methodologies and lifestyle issues. A good part of it will be in the nature of a ecorrective’ influence that all should welcome. Staying connected in spite of distances, realising the importance of body fitness, learning to make a productive use of time, differentiating between desirable essentials and empty luxuries and feeling a little more compassionate towards the cause of humanity, are some of the socio-cultural dividends that the global crisis might leave behind. One hopes all of this would improve the standards of our domestic politics as well.

(The writer is a former Director Intelligence Bureau) (IANS)