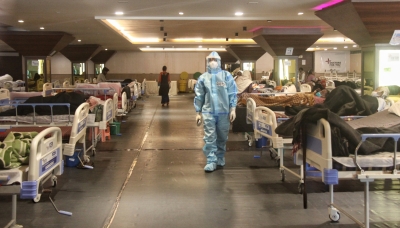 New Delhi– The second wave of the coronavirus pandemic in India is different from the first one in September 2020 as the rate of increase in new cases is significantly higher.

The Lancet Covid-19 Commission India Task Force said in a report that the increase from 10,000 to 80,000 new cases per day from February to April took place in less than 40 days.

The second differentiator is that many more of the cases testing positive are asymptomatic or mildly symptomatic, resulting in relatively low rates of hospitalisation and mortality.

The report said it is not entirely clear if the higher proportion of asymptomatic cases are entirely due to better contact tracing (more family members, for example, being tested).

The overall Case Fatality Ratio (CFR) since the beginning of pandemic in March 2020 has been reported to be around 1.3 per cent, while the CFR among patients who have contracted the virus since the starting of 2021 is far less at 0.87 per cent.

Provisionally, it appears that CFR appears to be lower in the second wave.

Yet, India is reporting 664 deaths per day across the country. Fatality numbers lag infection rates, and are likely to rise as infections surge, the report said.

Preliminary analysis indicates that while the pandemic has spread, the geographic contours of the second wave closely mirror those of the first wave, though with a deeper penetration into tier 2, tier 3 cities.

Over the past year, there are 215 districts that have been among the top 10 per cent in terms of case infections at one point in time.

But nine districts (Chennai, Kolkata, Mumbai, Nashik, New Delhi, North 24 Parganas, Pune, Thane, and Solapur), have been part of the top 10 per cent throughout the year.

The second wave has also been more geographically clustered so far.

The number of districts comprising the top 50 per cent has dropped from over 40 at the time of the last peak, to less than 20 currently, indicating a much more concentrated pandemic.

In fact during the first surge over August and September 2020, the number of districts for the top 75 per cent of cases was 60-100, while it has been around 20-40 districts during this wave, the report said. (IANS)