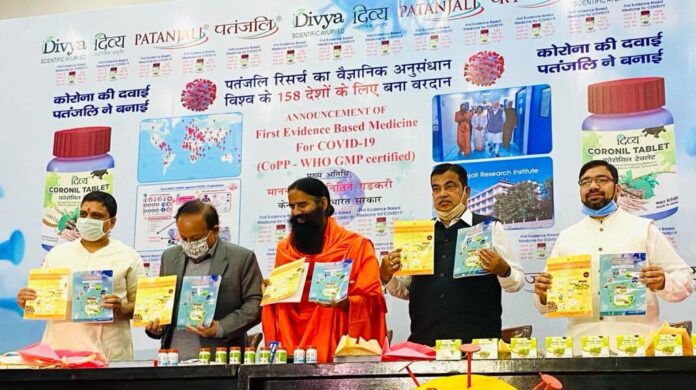 New Delhi– The Indian Medical Association (IMA) on Monday came down heavily on Union Health Minister Harsh Vardhan for endorsing Patanjali’s Coronil which was relaunched as treatment of Covid-19, a claim questioned by the World Health Organisation.

“As per the code of the Medical Council of India, which binds the code of conduct of every modern medical doctor, no doctor can promote any drug. However, it is surprising that the health minister, who himself is a modern medicine doctor, was found promoting the drug,” the association said.

The IMA said that the false and fabricated projection of an unscientific medicine made in the presence of the country’s health minister, later rejected by the WHO is a slap and insult to the whole nation.

The association questioned the Union Health Minister’s ethics as a physician and health minister of the country for making an appearance at the launch event organized by Ayurvedic drug firm Patanjali run by Yogaguru Ramdev.

The association mentioned a clause under the National Medical commission (erstwhile MCI) which prohibits a physician from promoting a drug.

“Under section 6:1:1, a physician shall not give to any person, whether for compensation or otherwise, any approval, recommendation, endorsement, certificate, report or statement with respect of any drug, medicine, with his name, signature, or photograph in any form or manner of advertising through any mode nor shall he boast of cases, operations, cures or remedies or permit the publication of report thereof through any mode,” the IMA specified.

The associations said that it will write to the NMC for seeking suo moto explanation for Harsh Vardhan’s “blatant disrespect to the code of conduct of Medical council of India”.

In a grand launch event held on February 19, where Harsh Vardhan and Union Transport Minister Nitin Gadkari were also present, Patanjali had billed Coronil tablets as the “first evidence-based medicine for COVID-19”.

In the event, Baba Ramdev, co-founder of the ayurvedic firm had claimed that the ayurvedic medicine has received certification from the World Health Organization (WHO), which was later denied by the UN body in an official tweet.

At the launch event of Coronil, Patanjali said, “Coronil has received the Certificate of Pharmaceutical Product (CoPP) from the Ayush section of Central Drugs Standard Control Organisation as per the WHO certification scheme.”

Hours later, the WHO South-East Asia tweeted: “WHO has not reviewed or certified the effectiveness of any traditional medicine for the treatment of COVID-19”.

Now when the WHO rejected the claims, Patanjali’s CEO Acharya Balkrishna made a clarification on Twitter. He wrote: “We want to clarify to avoid confusion that our WHO GMP compliant COPP certificate to Coronil is issued by DCGI, Government of India”.

Balkrishna also added that “WHO does not approve or disapprove of any drugs. Instead, it works for building a better and healthier future for people all over the world”. (IANS)