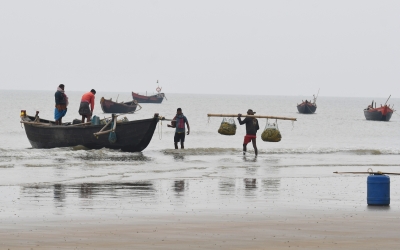 Chennai– The 56 Indian fishermen from Tamil Nadu who were released by a Sri Lankan court will be shifted to a detention centre on Monday following the completion of their quarantine period.

Since the fishermen were released on January 25, they have been under quarantine after few had tested positive for Covid-19.

Sri Lankan Prison authority sources told IANS that they would be moved to an immigration centre on Monday.

Fishermen unions in Tamil Nadu is on a confrontation path and several agitations were carried out at Rameswaram, Ramanathapuram, and Mandapam on the arrest of the fishermen by the Sri Lankan navy on charges of crossing the International Marine Boundary Line (IMBL) and 10 trawlers were also confiscated.

A high-level meeting of Indian and Sri Lankan authorities is expected to take place on the issue during bilateral talks between the Foreign Ministers of the two nations.

A series of meetings are scheduled to be held by Peiris and his delegation with Indian authorities and the arrest of Indian fishermen is likely to be prominently figured in the talks.

The Sri Lankan delegation will be requesting the Indian side for humanitarian assistance to the island nation which is currently under a severe economic crisis.

India has already supported the island nation with an economic assistance package in January to tackle its foreign exchange crisis.

Indian and Sri Lankan fishermen generally fish in the Palk Strait which is a narrow strip of water separating the two neighbouring nations.

This is considered a rich fishing ground for fishermen from both countries and the Sri Lankan Naval authorities and Sri Lankan coastal police arrest Indian fishermen if they cross the Palk Strait strip into the Sri Lankan side. (IANS)