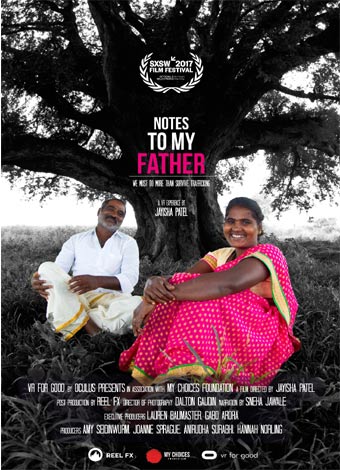 New Delhi, March 4 (IANS) Notes to My Father, a virtual reality documentary on the story of an Andhra Pradesh woman survivor of sex trafficking, will have its world premiere at the South By Southwest (SXSW) Festival in the US later this month.

Hyderabad-based My Choices Foundation, in conjunction with Oculus VR For Good, is presenting the documentary, which aims to educate the world about the horrors of human trafficking, read a statement.

The fest is to be held in Austin, Texas, later this month. The film will then make its way to India in May.

“Notes To My Father” revolves around the story of real life trafficking survivor Ramadevi and her father Kullayappa. The 11-minute documentary is directed by multi award-winning filmmaker Jayisha Patel, and executive produced by Gabo Aroro — Creative Director of the United Nations — who served as a project mentor for the movie.

Hannah Norling, Head of Marketing and Communications, My Choices Foundation and one of the film’s producers, said: “Through ‘Notes to My Father’, we wanted to educate India, and the world at large on the issue of sex trafficking and believed that using the immersive medium of VR was one of the most powerful ways to help people feel deeply connected to the cause.

“By telling the story of a survivor through the connection with her father, we aim to highlight the very real hope that trafficking can be prevented if only families in risk areas are aware. We are looking forward to the world premiere of the movie at the prestigious SXSW festival and hope that people stand up and take notice of the issue at hand.”

“Notes to My Father” is inspired by discussions and conversations with real life survivors and is a story of love, grief and reconciliation.

It forms the core of an awareness campaign by Operation Red Alert of My Choices Foundation titled ‘The Good Father’, a movement to prevent large scale human trafficking in India. Previously, Operation Red Alert conducted a research paper that gives startling insights on the compulsion behind human behaviour to understand causes on both supply and demand side of human trafficking.