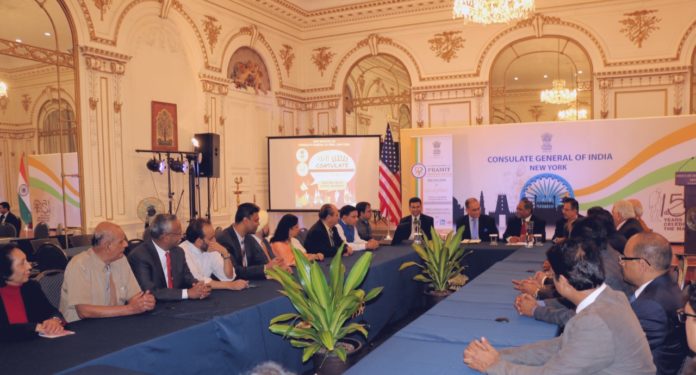 Through this initiative, the Consulate intends to deepen and expand the relationship between community organizations and Team Consulate by discussing issues of the community and also to create transparency and understanding about the working of Consulate’s various wings and initiatives that can benefit the community.

Each month the Consulate will invite a community organization for an informal interaction with its officials. Under ‘Chalo Consulate’, the first informal meeting was organized with Global Organization for People of Indian Origin (GOPIO) on January 13, 2020. Around 30 members of GOPIO office bearers visited the Consulate and discussed various works and initiatives of the Consulate.

In his opening remarks, Consul General described the workings of various wings of
Consulate as well informed them about PRAMIT (Pravasi Mitra), a web application launched to strengthen response management system of Consulate.

PRAMIT is an e-Governance solution, which is designed in house by CGI, New York. PRAMIT is a dashboard based centralized monitoring and response system for calls as well as messages form users. At present consulate is able to monitor/reply each and every Call/Queries received within one business day, it is very simple and user-friendly web
application.

Mr. Thomas Abraham, Chairman (GOPIO), thanked the Consul General for the opportunity to interact with him and his officials and also appreciated the Q&A session on PRAMIT.

At the end of the meeting, GOPIO officials presented Consul General with two First Day Covers released by the US Postal Service at the First Convention of People of Indian Origin in New York in 1989. This was followed by dinner and networking followed.

Requests are invited from Community Organizations to participate in “Chalo Consulate”. Please send your request to madad.newyork@mea.gov.in .