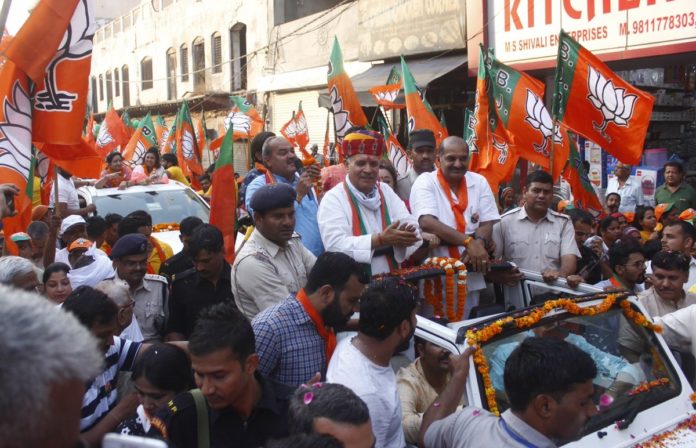 New Delhi–As the Narendra Modi-led National Democratic Alliance (NDA) looks set for a second term with leads in 340 seats so far, India Inc rushed in with congratulatory messages for the Prime Minister and also listed the challenges the new government will face along with necessary steps to be taken.

Sandip Somany, President of FICCI said continuity and stability at the Centre would enhance chances of more economic reforms along with an increasingly stabilising Goods and Services Tax (GST), Insolvency and Bankruptcy Code (IBC) and the Real Estate (Regulation and Development) Act.

“There is an urgent need to bring investments on track and boost consumption to better GDP growth from the current around 7 per cent level, which will help in generating more jobs and take care of the rural distress,” Somany said.

The next government will have to quickly plan for a robust reform agenda that would not only enhance consumer spending, but will also create conditions for higher private sector investments and exports, he added.

ASSOCHAM President B.K. Goenka said, “A strong and stable government would bring in more foreign investment even as the domestic firms are witnessing renewed confidence. We are in for a virtuous cycle where consumption and investment drive each other. With inflation expected to stay benign, and growth set to move higher with the help of lower interest rates, we would soon be in a sweet spot.”

Mining and metals major Vedanta Resources’ Chairman Anil Agarwal exuded confidence over the Prime Minister’s leadership and said that the new government will continue with the reforms agenda.

“A strong and stable government with a fresh mandate will be well placed to give the reforms agenda an urgent push to provide the much-needed impetus to investor confidence especially given the current state of the world economy,” said Sunil Bharti Mittal, Chairman, Bharti Enterprises.

Ajay Singh, the Chairman of budget airline SpiceJet, also the person who coined the phrase “Abki Baar Modi Sarkaar” said: “I extend my heartiest congratulations to our Prime Minister Narendra Modi on his stupendous victory.”

Noting that the country’s aviation sector has witnessed “remarkable growth” in the last five years, he said: “We hope that our government will address the structural challenges facing the sector urgently.”

There were also words of caution for the upcoming government considering the global and domestic economic situation.

Deepthi Mathew, economist at Geojit Financial Services said that the economy currently is “much weaker” than what it was in 2014.

“Rural distress and slowing investment in the country are two major issues that need to be addressed in an urgent manner. The developments in the global economy are also not favourable, especially with regard to the rising crude oil prices. The low crude oil prices benefited NDA-I in a bigger way,” Mathew said.

Sanjay Chamria, Vice Chairman and MD, Magma Fincorp said that the government’s primary move in the financial sector should be to address the lack of money movement at banks and accelerate the flow of money in the system. (IANS)