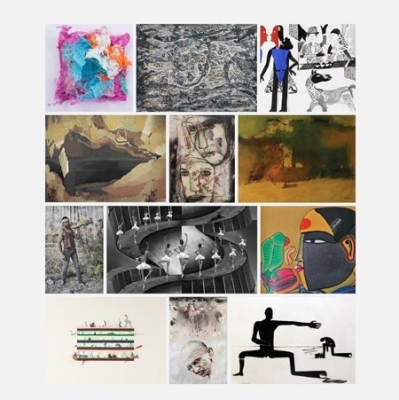 Mumbai– Amid the second wave of the Covid-19 pandemic in the country, the Indian art community has united to raise funds to assist with the ongoing relief efforts through ‘Art Rises for India’, a 24-hour online fundraiser auction hosted by Saffronart from May 19-20.

According to a statement from the auction house, Art Rises for India features over 120 works of modern and contemporary South Asian art, all of which have been generously donated by artists, gallerists, collectors, and patrons to support the cause.

All the proceeds from the auction, including the reduced buyer’s premium, will be donated to grassroots non-profit organisations such as Goonj, Hemkunt Foundation, YUVA, Dastkar, FICA, Khoj, Street Survivors, Aangan and Charaka, which are working on the ground to provide medical support and daily subsistence to those in need.

The highlights of the fundraiser auction include an untitled work by Amrita Sher-Gil, and a watercolour on paper by Ganesh Haloi, both estimated at Rs 8-10 lakh each; a 2015 oil on canvas by A. Ramachandran, estimated at Rs 7-9 lakh; Gieve Patel’s bronze and wood sculpture Eklavya estimated at Rs 6-8 lakh; as well as significant works by Ram Kumar, Krishen Khanna, K.G. Subramanyan, Thota Vaikuntam and Sudhir Patwardhan, among other artists.

The contemporary section includes a 2017 work on paper by Imran Qureshi titled ‘When I Thought of You’, estimated at Ra 7-9 lakh; N.S. Harsha’s ‘Beginning’ (2019), estimated at Rs 5-7 lakh; a set of two works by Rana Begum, estimated at Rs 3-5 lakh, as well as works by Vivan Sundaram, Alyssa Pheobus Mumtaz, Rathin Barman, Natessa Amin and Gigi Scaria, among others, said the auction house.

Saffronart CEO and Co-founder Dinesh Vazirani said, “We are living in unprecedented times. The harsh reality of the deadly second wave of the COVID-19 virus has compromised the lives of millions across India. All of us have been touched by this tragedy in some way.

“We, the Indian art community, have decided to join forces in raising funds to assist the NGOs doing critical work at the grassroots level, which includes providing medical support, basic amenities and sustenance to daily labourers, migrant workers, street survivors, artists, artisans, craftspeople, and anyone in need.

“This online fundraiser auction has come together thanks to the generous donations of several artists, gallerists, and collectors. As we did with our COVID-19 Relief Fundraiser Auction last year, we hope to raise a significant corpus of funds and do our small part in helping those in need.”

In 2014, Saffronart hosted an auction on its sister website StoryLTD.com, which aimed to help rebuild homes and lives of those affected by the floods in Jammu and Kashmir, and a charity auction in 2008 in aid of victims of severe flooding in Eastern India.

The no reserve online auction will take place on saffronart.com from May 19-20. (IANS)