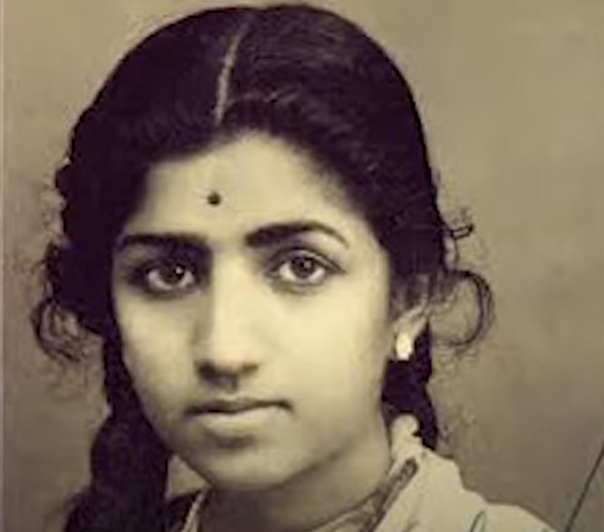 BOSTON–I’m sure she was in our home when they brought me in after my birth.

Everyday since that time, her voice rang in my home – during my early years. I took her with me to college. And I brought it as Dahej to my Piya Ka Ghar. She’s on my phone, she’s on every computer we own. She’s on my bookshelf, her voice rings in my backyard – kahaan kahaan basti hai woh.

For almost every singer that I know, she was the Drona (the Great Teacher). We will remain her shishyas because her songs are the only needed syllabus and the full curriculum for playback singing. In around 60 seconds, her songs can convey Bhaav better than humongous literary works.

She is Sur ka sahaara, not the other way around. She is the Dharti ka sur. She will always be the Saraswathi ma of music, and it was poignant that she left on that day.

From the files: Click on the image below to listen a tribute paid to Lataji about a year ago.

Her story of personal sacrifice, taking responsibility for the family on her father’s death when she was 13, is in itself an inspiring one. I am happily certain that her regret of not being able to pursue classical singing was misplaced. She could have done that too and the world would have been poorer.

I am forever grateful to Sangeeta Gupta-ji, daughter of Bollywood’s arguably greatest composer Madan Mohan saheb for bringing me a closer insight into the inspiring human being that Lata-ji was. When I received a signed CD cover, I was in tears. For many days. As for me, I’m just grateful for being born in a world in which her voice rings in every corner.

But, really, what does the word “die” mean when applied to people like her? It is unimaginable that she doesn’t live in every Indian home. She lives in my home – filling it with every emotion known to mankind.

She will be with us, forever.

(Based in Boston, Anuradha Palakurthi is an award winning Indian American singer.)