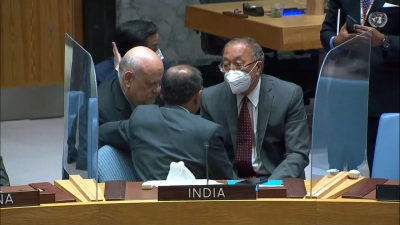 United Nations– India has voted for a United States-sponsored resolution to strengthen sanctions on North Korea which was vetoed by China and Russia.

The US launched the unsuccessful effort on Thursday to punish North Korea which had tested three missiles on Wednesday after US President Joe Biden had wrapped up a visit to South Korea and Japan.

Speaking on the resolution, US Permanent Representative Linda Thomas-Greenfield warned that North Korea was preparing for an imminent nuclear test.

The failed resolution would have tightened sanctions on a wide range of products ranging from crude oil to tobacco and frozen the assets of a cybercriminal outfit.

The vetoes marked another stage of intensification in the confrontations in the Council between the western countries and China and Russia.

The other 13 countries in the Council presented a united front on the North Korea issue.

The issue will now go to the General Assembly under new procedures adopted by it following Russia’s vetoes of resolutions in the Council condemning its invasion of Ukraine.

Although the Assembly does not have the enforcement powers of the Council, it will now take up issues vetoed by a permanent member in the Council in the expectation that it will show the isolation of the veto-wielder.

India, which had stayed neutral on the resolutions on the Ukraine conflict that Russia had vetoed, did not abstain on this resolution for which the prime opposition came from China.

India did not speak during the Council discussion on the resolution on Thursday but had previously raised concerns about the transfer of North Korean missile technology to Pakistan.

Without naming the two countries, India’s Permanent Representative T. S. Tirumurti told the Council on March 25, that “India also believes that there is a pressing need to address the proliferation of nuclear and missile technologies related to DPRK (North Korea) in our region. These linkages have an adverse impact on peace and security in the region, including on India”.

Before the session started, China’s Permanent Representatives Zhang Jun went over to Tirumurti, who had been speaking at India’s seat with Brazil’s envoy Ronaldo Costa Filho.

Zhan sat down on a seat for the Indian delegation behind Tirumurti’s and the three diplomats were seen in an animated conversation.

Later speaking to the Council on the resolution, Zhang tried to link it to the Indo-Pacific developments asserting that the US was making North Korea a chess pawn for its strategy for the region.

During his Asian trip, Biden had held a Quad summit in Japan with Prime Ministers Narendra Modi of India, Fumio Kishida of Japan and newly-elected Anthony Albanese of Australia.

Zhang said: “The crux of the matter is whether or not someone wants to use the Korean peninsula issue as a card for its so-called Indo-Pacific strategy, whether or not they want to use the handling of the Korean peninsula issue as a chessman on the chessboard for their so-called Indo-Pacific strategy. That’s the very nature of the issue.”

He and Russia’s Permanent Representative Vasily Nebenzia said that the punitive sanctions would not help resolve the problem with Pyongyang but would only add to the sufferings of the people in that country.

Thomas-Greenfield said that the Council’s restraint had been counterproductive and “the DPRK has taken the Council’s silence as a green light to act with impunity and escalate tensions on the Peninsula”.

She said that the sanctions would not affect the humanitarian needs of the North Korean people who are facing a Covid crisis.

The US has offered vaccines and medical help, which Pyongyang has not accepted, she said.

North Korean dictator Kim Jong-Un, a mercurial personality, appears to be testing Biden and trying to take advantage of the preoccupation with Ukraine.

He has carried out at least 16 missile tests so far this year, some of them that could be inter-continental ballistic missiles (ICBMs).

Kim Jong-Un suspended missile and nuclear tests in 2017 during a bout of diplomacy with an equally unpredictable former US President Donald Trump, who matched his verbal bluster.

Trump’s diplomatic efforts ended after a failed meeting with Kim in Singapore.

The sanctions that the US proposed would have cut crude oil exports to North Korea and banned its mineral products exports as well as of some other materials.

Tobacco exports to North Korea would have also been curtailed.

The US also sought to freeze the assets of an organisation called Lazarus Group, which North Korea uses for cyber heists and espionage and which has been accused of spreading malware.

The freeze would also have applied to a company that provides manpower abroad and to another that is a defence contractor in Mozambique. (IANS)