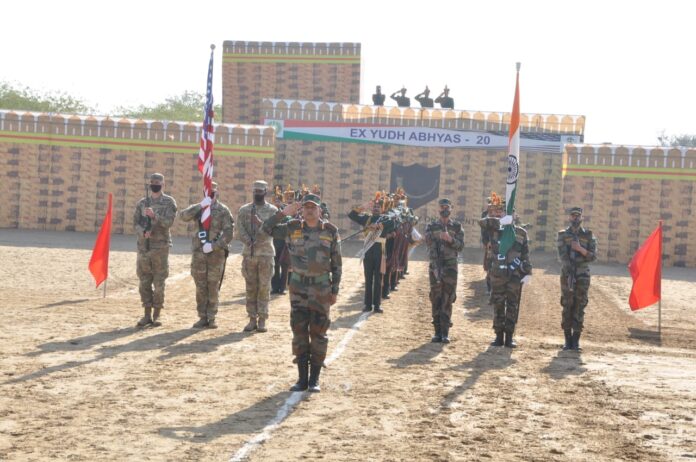 Jaipur–“The India-US joint training Exercise Yudh Abhyas commenced at the Mahajan Field Firing Ranges on Monday with an opening ceremony that saw the unfurling of the national flags of both countries amidst the playing of the national anthems,” said Liutenant Colonel Amitabh Sharma, PRO Defence, Rajasthan.

On Saturday, the US Army contingent comprising a brigade headquarters and a battalion group of the 2nd Battalion, the 3rd Infantry Regiment of 1-2 Stryker Brigade Combat Team, comprising of 270 personnel, had landed at Suratgarh. The 14-day schedule is focused upon joint training in Counter-Insurgency environment under the mandate of United Nations, he added.

He impressed upon both the contingents to achieve optimum cohesion and inter-operability to achieve the military objectives of the exercise. He stressed upon importance of free exchange of ideas, concepts, best practices between the troops and the necessity to learn from each other’s operational experiences as well enhance situational awareness

A number of aerial platforms including newly inducted indigenous Advance Light Helicopter WSI ‘RUDRA’, MI – 17, Chinooks, Stryker Vehicles of US Army and BMP-II Mechanised Infantry Combat Vehicles of Indian Army, will be utilised in the exercise.