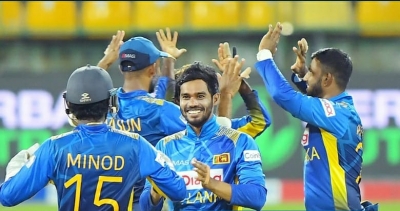 Colombo– Coach Rahul Dravid’s decision to field five ODI debutants, three of whom could bat, failed to pay off as India were bowled out for 225 in the 44th over in the third and final ODI against Sri Lanka at the R Premadasa Stadium here on Friday.

Neither Rana, Samson, who are proper batsmen, nor all-rounder Gowtham could cash in on the opportunity against a weak Sri Lankan side as the Indians succumbed to spinners Akila Dananjaya and Praveen Jayawickrama, who shared six wickets between them.

While left-arm spinner Jayawickrama took 3/59, offie Dananjaya took 3/44 as the two ran through the middle and lower order to negate a strong start given by opener Prithvi Shaw (49 off 49 balls) and Sanju Samson (46 off 46 balls).

After losing captain Shikhar Dhawan early for 13 off 11 balls, Shaw and Samson added 74 for the second wicket to lay strong platform.

However, other than Suryakumar Yadav, who got 40 off 37 balls, no one else could stay on and play a counter-attacking innings.

Leg-spinner Rahul Chahar and left-arm pace bowler Chetan Sakariya are the others making their ODI debut on Friday.

India made six changes to their side and apart from the five debutants also brought in pacer Navdeep Saini. The team management rested the second ODI’s player of the match, Deepak Chahar.