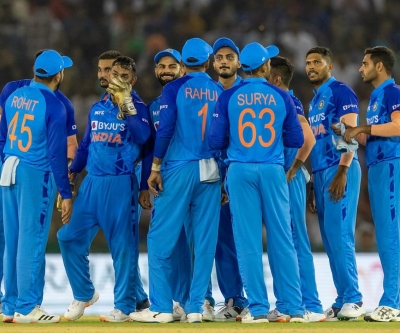 New Delhi– The Rohit Sharma-led Indian cricket team is to leave for Australia on October 6, two days after the conclusion of the ongoing home T20I series against South Africa and will have a preparatory camp ahead of the much-anticipated T20 World Cup.

After landing in Australia, India will train in Perth till October 13, where they are also slated to play a practice game against Western Australia. Thereafter, they will move to Brisbane to take on Australia and New Zealand in two more warm-up games before the start of the proper tournament, an ESPNcricinfo report said.

At least five members of the T20 World Cup squad — including the standbys — have no experience of playing top-flight cricket in Australia. The likes of Suryakumar Yadav, Harshal Patel (who made one trip with the U-19s in 2009), Arshdeep Singh, Deepak Hooda (who made one trip with U-19s in 2013) and Ravi Bishnoi are those five cricketers. So these games will help them in acclimatising to Australian conditions before the mega event.

Meanwhile, India are still waiting for clarity on the fitness of Deepak Hooda and Jasprit Bumrah. Both Bumrah and Hooda have been ruled out of the ongoing T20I series against South Africa and are currently at the National Cricket Academy in Bengaluru nursing back injuries.

The 28-year-old Bumrah, who missed the Asia Cup 2022 with back issues, had only just come back for the T20Is against Australia late last month. But, he is now back under the care of the medical team at the NCA, where he is believed to have undergone scans.

The report further said that the pacer hasn’t been ruled out of the T20 World Cup entirely but there are serious doubts over his participation. If injuries do rule out both Hooda and Bumrah, it’s likely Chahar and Mohammad Shami will be called into the main squad.

India are in Group 2 at the Men’s T20 World Cup 2022 alongside Pakistan, Bangladesh, South Africa and two qualifiers. They will open their campaign against Pakistan at the MCG on October 23, which will be followed by matches on October 27 (vs Qualifier in Sydney), October 30 (vs South Africa in Perth), November 2 (vs Bangladesh in Adelaide) and November 6 (vs qualifier in Melbourne).