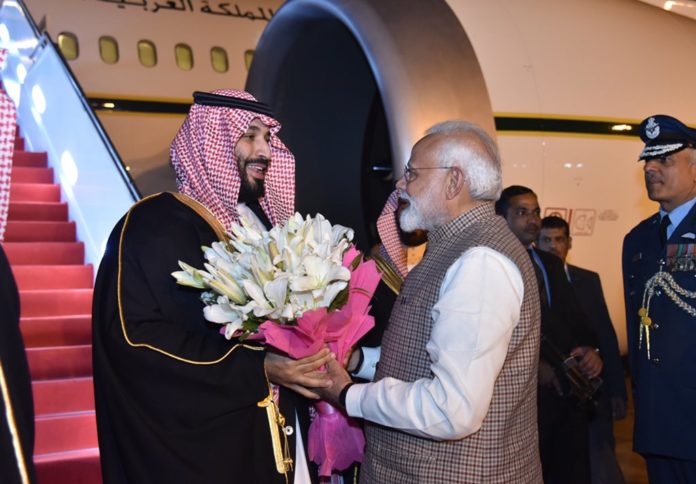 New Delhi– India and Saudi Arabia on Wednesday strongly condemned the terror attack on Indian forces in Pulwama, called upon countries to renounce use of terrorism as an instrument of state policy and underlined the importance of comprehensive sanctioning of terrorists and their organisations by the United Nations.

The remarks on the UN sanctions regime during discussions between Prime Minister Narendra Modi and visiting Crown Prince Mohammed bin Salman comes two days after the joint statement issued during visit of the Saudi Arabian leader to Pakistan which had “underlined the need for avoiding politicisation of UN listing regime”.

Briefing the media following delegation-level talks between Modi and Salman here, Secretary (Economic Relations) T.S. Tirumurti said they expressed strong condemnation of terrorism in all its forms and manifestations.

India is keen to get Jaish-e-Mohammed chief Masood Azhar designated as a global terrorist by the United Nations. JeM has cliamed responsibility for the Pulwama terror attack that killed 40 CRPF personnel.

Asked how the remarks of the two leaders squared up with Saudi-Pakistan joint statement, Tirumurti said he did now want to comment on it, but “if you are really looking at politicisation, you know who is politicising it”.

Tirumurti said the two leaders called on all states to reject the use of terrorism against other countries, dismantle terrorist infrastructure, cut off any kind of support and financing to terrorists from all territories against other states and bring the perpetrators of terrorism to justice.

“The two leaders condemned in the strongest terms the recent terrorist attack on Indian forces in Pulwama in Jammu and Kashmir. Both leaders called upon all countries to renounce use of terrorism as an instrument of state policy. They called on states to deny access to weapons to commit terrorist acts against other countries.

“Both leaders underlined the importance of comprehensive sanctioning of terrorists and their organisations by the United Nations. They called for concerted action by the international community against terrorism and early adoption of the UN comprehensive convention on international terrorism,” he said.

Answering a query, he said the complicity of Pakistan in Pulwama attack was very much underlined.

The official also said both sides agreed to set up a Strategic Partnership Council and Saudi Arabia will invest $ 100 billion in India in a range of areas. He said the two leaders agreed to constitute a comprehensive security dialogue at the level of NSAs.

He said that Prince Mohammed appreciated “consistent efforts” by Modi since May 2014 including Prime Minister’s personal initiatives to have friendly relations with Pakistan”.

“In this context both sides agreed on the creation of conditions necessary for resumption of dialogue between India and Pakistan,” he said.

He also said that no mediation was offered by the Saudi authorities.

Tirumurti said that the Crown Prince highlighted extremism and terrorism as matters of common concern and expressed his determination to cooperate with India to fight this menace particularly through strong intelligence partnership.

“To enhance cooperation in counter-terrorism efforts and benefit mutually in real-time intelligence sharing, the two leaders agreed to constitute a comprehensive security dialogue at the level of National Security Advisors and set up a joint working group on counter-terrorism.

On the defence front, they agreed to hold the first naval exercises at the earliest and expand defence relations in other areas like defence exercises, joint production, supply chain development,” he said.

Tirumurti said the meeting was held in “an atmosphere of great warmth and friendship testifying to the close rapport between the two leaders”.

He said the visiting leader conveyed his appreciation of the Indian model which signifies the ethos of inclusiveness, pluralism and tolerance.

“Both sides agreed to set up a Strategic Partnership Council which will be guided by Prime Minister and the Crown Prince and will have ministerial representation covering all aspects of bilateral relations. This is an extremely important development in line with desire of Saudi Arabia to deepen partnership with eight strategic partners one of which is India.”

He said Modi welcomed the announcement of Crown Prince to invest $ 100 billion in India in a range of areas like energy, refining, petrochemicals, infrastructure, agriculture, manufacturing.

“This is a clear reflection of confidence of Saudi Arabia in the vibrancy of Indian economy,” he said adding there was talk of realising untapped potential in trade particularly non-oil trade.

He said they expressed satisfaction at first joint venture in energy of a refinery and petrochemical project estimated at $ 44 billion and the prime minister welcomed Saudi Arabia’s participation in India’s strategic petroleum reserves.

Tirumurti said the two leaders agreed to increase the frequency of of direct flights of carriers India and Saudi Arabia by 3,84,000 seats per annum which will give a huge boost to tourism as well as large Indian community.

He said at India’s request, Saudi Arabia decided to increase haj quota from India to two lakhs. India, he said, has also decided to extend e-visa facilities to Saudi nationals.

Tirumurti said Saudi Arabia also agreed to resolve issues related to Indian workers who are currently stranded in SA due to closure of one foreign country.

The two leaders agreed to enhance maritime security in the Gulf and the Indian Ocean Region and agreed to cooperate along with other Indian Ocean rim countries in serving as the net security provider for IOR.

In a veiled reference to China’s ‘One Belt, One Road project’ which also includes China-Pakistan Economic Corridor, Triumurti said both sides agreed that regional connectivity projects should be based on univsersally recognised international norms including respect for sovereignty and territorial integrity of states.

The two leaders expressed serious concern over cyber terrorism and misuse of cyber space and said they will also work together to address the problems and issues of fugitive economic offenders.

Answering queries, Tirumurti said Afghan situation was not discussed, but there was a discussion on areas relating to Middle East, Syria, Palestine.

Answering a query, he said the two sides agreed for comprehensive sanctioning of not only terrorists but terrorist organisations by the UN. (IANS)