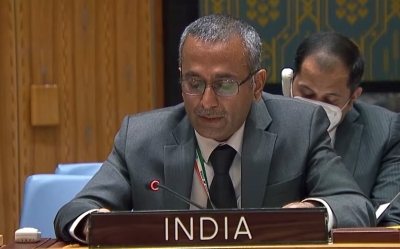 United Nations– India clarified that it has placed export restrictions on wheat to ensure that the countries in need are given priority and reiterated that it will help those facing food shortages because of the Russia-Ukraine war.

“India is committed to work constructively in mitigating the adverse impact of the conflict on food security and in ensuring that vulnerable countries have sufficient cushion against fluctuations in the global market,” India’s Deputy Permanent Representative R. Ravindra said on Monday at a Security Council briefing on Ukraine.

He said that the wheat export policy announced last month “will ensure that countries in need are given priority”.

“In order to manage our own overall food security and support the needs of neighbouring and other vulnerable developing countries, we had announced some measures that allow for wheat exports based on approvals to those countries who are required to meet their food security demands.”

India’s order banning only the commercial export of wheat clearly said that the country would provide it to neighbouring countries and to others through their governments, but some Western media reports misrepresented it to make it seem like a complete ban.

Reacting to these characterisations, US Agriculture Secretary Tom Vilsack expressed “deep concern” and Washington’s Permanent Representative Linda Thomas-Greenfield called on India to lift the restrictions even though ending the ban on commercial exports would affect the vulnerable countries, which can ill afford to compete for supplies on the open global markets.

Where foodgrains are concerned, Ravindra said at the Council that “open markets must not become an argument to perpetuate inequity and promote discrimination”.

He said that the principles “of equity, affordability and accessibility” are important for food grain supplies, and added: “We have already seen to our great regret how these principles were disregarded in the case of Covid-19 vaccines.”

Western countries prioritised making vaccines available in their own nations before sharing them with others.

Ravindra said that developed countries should do more to alleviate the destabilising impact of the foodgrain and fertiliser shortages and zooming oil prices on the people of the developing countries due to the Ukraine conflict. (IANS)