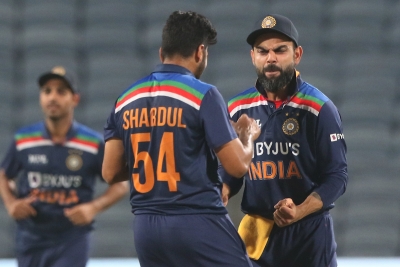 There is a lot of hope and hype around the World Cup. Rightly so; it is the pinnacle of all competitions. The India team is always a team to beat and most talked about as title contenders.

The consistency of this Indian team in all formats has titled them with this reputation.

Despite not having a great start to the T20 world cup where they have played the lone match vs Pakistan so far, no opposition in their group would like to take them lightly.

Over the past few years, the Indian team has shown its resilience and ability to bounce back. The challenge for them this time though is huge as they look to dig into their energy reserves and hit a rhythm that can lift the team once more.

While watching the India-Pakistan match at the Dubai stadium that evening, I just felt that the Indian team looked a bit jaded. A couple of days later, I shared the same thought with my colleagues and realised that I was not the only one bearing the feeling.

The Indian players due to the postponement of the IPL had a month off in May. They travelled to England in June for the World Test Championship final and remained in England to play the competitive Test series. They then flew directly to UAE to compete in the remainder of the IPL season.

The level of competitiveness of the tournament and the change in climate would have surely added heat to their routines. I landed in Dubai in the middle of September and it was hot. An outdoor run had to be limited to the minimum time.

The IPL concluded a couple of days prior to the start of the ICC qualifiers. While 8 different teams participated in the qualifiers, the Indian team started with their warm up matches prior to the actual competition during that period.

It might sound strange but even if you travel with families and live in luxury, the pressure of the competition is always surrounding you at all times. Plus leading a life in a bubble; a bio secure environment. Yes, this word (bio secure) has become synonymous with sports since last year, the pandemic year.

It means that the players/the group involved in the activity are isolated from those outside the bubble world. So, you are physically meeting and interacting with only those people who are within that bubble.

Safety is paramount. But the isolation due to restrictions can set you in a zone/space of yourself.

Some days are good while some are different but its you in that space all by yourself. It does take a toll on the mind and body. The freshness is absent.

The fair argument will always be that everyone knows of the scenarios prior to signing up. Everyone knows the drill and has agreed to abide by them. Yes, but irrespective of how good the decoration of flowers is in the hall, there is no substitute to being in the garden with fresh flowers. The mind needs stimulus and it has to be constantly generated.

When you play at the highest level, there is no escape. There is no way that one can afford to drop their performance level. Hence it becomes second nature for performers to be in that zone more than anyone else. But its only human to err.

The Indian team has match winners and performers amidst the group and most of them are seasoned campaigners. They may require themselves to have a brief shut down to restart all over again. It is the World Cup and it does not get bigger than this. (IANS)