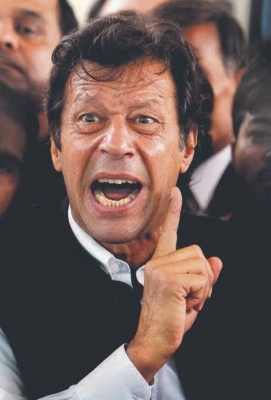 Islamabad– Pakistan Tehreek-e-Insaf (PTI) Chairman and former Prime Minister Imran Khan has warned of revealing all the secrets and details of every player behind the ‘conspiracy’ that led to his ouster, if he and his demand of early elections is ignored and negated.

Khan said that he would unmask all the characters involved in the alleged regime change conspiracy if pushed against the wall, hinting indirect pressure and threat to the country’s military establishment, which has been one of the targets of PTI’s social media campaigns and has also been openly called out by Khan in public gathering, interviews and statements.

“I know the role of each character involved in this conspiracy. I have recorded a video, which I have kept at a safe place. If anything happens to me, the video will be shared with the nation,” Khan said.

“I am aware of what happened. I am only sitting quite because I know that if I start revealing everything, it will harm the country,” he added.

However, Khan said that if he, his party and his narrative is pushed against the wall, if his party members are harassed and intimidated, he will be left with no option but to bring what he claims as the truth out for the whole nation to see and decide.

Khan’s statement is part of a consistent campaign, in which he claims that his government was ousted through a US-led regime change conspiracy, implemented through his opposition, along with the support of the military establishment, which, despite Khan’s repeated calls, refused to stand by his side.

Social media handlers of PTI have been engaged in a major anti-army, anti-establishment campaign, creating trends and lashing out at Army Chief General Qamar Javed Bajwa for not coming to Khan’s rescue and becoming party to the regime change conspiracy against his government.

Khan, since then, has been demanding intervention of the military establishment in the country’s political outlook, accusing them of bringing a government of “thieves and convicted criminals”.

Khan’s narrative has been widely accepted by millions of his supporters, who are now seen openly questioning the military establishment with derogatory statements on social media platforms and creating trends that target the army chief to the level of even calling him a ‘traitor’.

On the other hand, the Pakistan Army has maintained that it is not going to get involved in any political maneuvering, opting to stay neutral and not take sides.

Pakistan’s military establishment has also called on the people to refrain from dragging it into politics, a stance that many believe became the reason for Khan’s downfall.

When Khan came to power, he was known as the blue-eyed boy of the military establishment. However, since his ouster and the military’s rare show of patience against the ongoing accusations, Khan seems to be failing to pull back the military’s support, which is pivotal for any political party to come to power in Pakistan. (IANS)