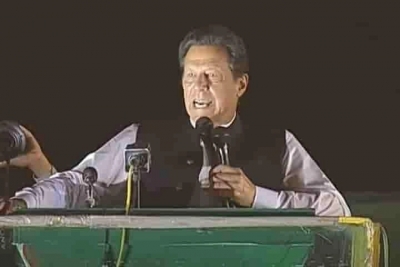 A large number of party workers and supporters were present at Islamabad toll plaza to welcome their leader, Express Tribune.

“This caravan has not entered Islamabad but into a naya (new) Pakistan,” he wrote, adding that they will earn “real independence” now.

“The workers present at D-Chowk wait for me� I am bringing a sea of people there,” Khan announced atop his container, Express Tribune reported.

Khan earlier in the evening said that his long march had entered Punjab and heading towards Islamabad.

“No amount of state oppression and fascism by this imported govt can stop or deter our march,” the former premier wrote on his official Twitter handle.

The PTI chief in a fresh statement to his supporters this evening asked them to take to the streets following the top court’s verdict regarding the venue of the political gathering.

“I urge the entire nation to take to the streets with their families after the decision of the Supreme Court,” Imran said in a video statement released from an undisclosed location.

The former premier added that he was on his way to the famous D-Chowk and asked his supporters to come out of their homes to convey a message that they won’t accept anyone’s subservience. (IANS)