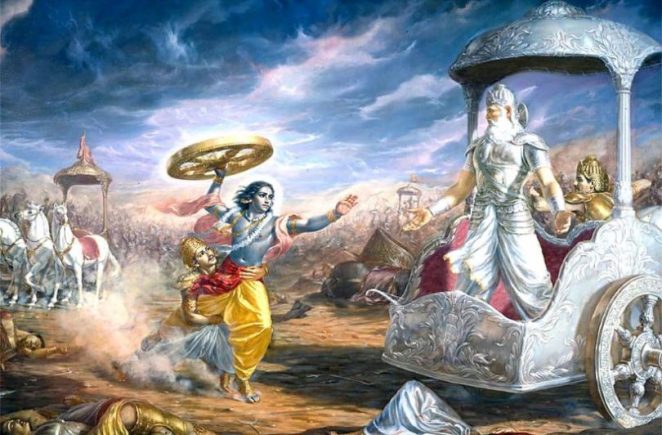 Naperville, IL–On a Sunday afternoon in Naperville, a Chicago suburb, 30 Indian American students pay close attention while the teacher explains the battle on the tenth day of the Kurukshetra war – in the ancient epic tale of the Mahabharata — in which Bhismapitamaha is grievously wounded by Arjuna’s arrows.

The children, aged four and half years to 14, listen as the teacher, Ajay Jain, narrates the story, illustrating it with slides. Then he asks the students what qualities of Bhismapitama they admire. One tiny hand after another goes up. “Loyalty to the motherland, a warrior who kept his promise no matter what the cost, exemplary courage” were among the responses.

As American-born children of Indian descent, some of the students want the epic to be translated into a modern context. Was the Brahmaastra more powerful than today’s nuclear weapons, one child wants to know.

The students are participating in a Hindi Gurukul class, run by Ajay Jain and Kunjal Harshavat, both MBAs from the University of Chicago’s business school. Ajay and Kunjal have been teaching students Hindi since 2008, earlier in association with local temples. Recently they established the Gurukul to include the teaching of Hindi and Indian culture, in addition to yoga and meditation, to school students.

Even in Chicago’s bitter winter, the Gurukul attracts enthusiastic students and parents, with only the occasional snowstorm disrupting attendance. The class begins with a ‘savdhaan’ (attention) from the teacher followed by prayers in Hindi. On Indian festival days, a student is called on to explain the meaning and significance of events like Maha Shivratri, Makar Sakranti et al.

Mamta Garg, another teacher, puts the students through the basic yoga postures and breathing exercises, explaining that yoga would help them concentrate on their studies and help them remain serene in the face of stress.

Recent studies here have shown high levels of stress among school students facing the burden of academic excellence and peer pressure. A study in Naperville showed that seventh graders cited “fitting in and having the approval and acceptance of peers” as the top stress factor.

To Indian American students, faced with the prospect of defending their religion and culture, the Gurukul reinforces in them a sense of pride and community in their origin. When explained the significance of events in the Mahabharata and Ramayana, what would otherwise have appeared an inexplicable ritual takes on a new and deeper significance.

One can see this rising awareness among the students, who appear eager to learn about ancient Hindi mythology, and more important, how its lessons can be imbued into their daily lives.

Ajay and Kunjal spend a considerable amount of time devising the curriculum. “I do not expect the students to have any grounding in the language when they come here,” says Ajay. His personal experience has helped him shape the curriculum. When he visited the Jain temple here, he found that his young son did not understand the slokas. So, he explains the prayers in class, with the pronunciations in Roman text and the meanings in English.

Ajay’s ambition is to see that the Gurkul eventually grows to have nine levels of classes from elementary to intermediate and advanced. “The kids are very smart,” says Ajay, “they pick up very quickly.”

What motivates two busy professionals to devote so much time to community service? “In our MBA class, one of the lessons is to create an impact. We are impacting the next generation because this is the age when they easily assimilate values,” says Kunjal.

Eventually, Kunjal hopes that the study of Hindi would be counted towards school credit along with foreign languages like Spanish and French.

Ajay grew up in a middle-class family in India. For him, it is also about a contribution to the land of his birth, and an implied tribute to his mother, whose discipline still inspires him. “Even today, she gets up at 4 a.m.,” he says, “and I too do it now because it gives me a few extra hours of solitude to devise and plan the Gurukul curriculum.”

The Hindi Gurukul recently received recognition from the Illinois State Board of Education for having met its ethnic language programme standards. Ajay said this recognition holds great promise.

“This takes us a step closer to get our students recognition for foreign language skills at the high school and college levels in future,” he said.