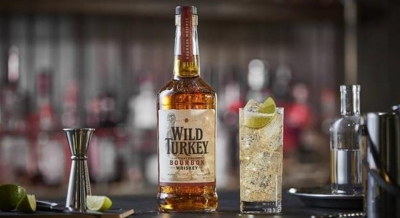 New Delhi– Wild Turkey, the iconic American bourbon brand from Kentucky, announces its launch of a new variant in India as part of an ever-growing global expansion. The award-winning portfolio has been praised whiskey available in Australia, Japan and other countries within Asia-Pacific, including India, and has now officially released its new variant in India, Wild Turkey 81.

Increased by just one proof from the standard release it is characterized by the bold, authentic full-bodied flavour, and is aimed at the Bourbon drinker set on blending the spirit in cocktails.

“Introduction of our premium American bourbon in our India portfolio makes it much stronger. A perfect serve to kickstart the evenings, Wild Turkey 81 is the choice for consumers looking for easier drinking options without losing the big flavours and is expected to become the preferred choice for bourbon connoisseurs,” says Ashutosh Rajput, Country Manager, Campari India

It was crafted by Eddie Russell, the son of master distiller Jimmy Russell, as a way to experience the true bold flavour of the brand at an approachable ABV. The elder Russell has historically sworn by the level of 101 proof (50.5 per cent alcohol) that has been the hallmark of the brands whiskies. The younger Russell has argued for a lower proof spirit that would appeal to younger drinkers, with their tendency toward mixing, and succeeded with the “81”.

Using a mix of aged six, seven and eight-year-old whiskies (much older than what’s typical for its price point), he created a Bourbon that shines through concoctions, especially when used in cocktails. Its high rye mash matured in heavily charred casks provides a big flavour at a more approachable ABV than 86.8 or 101. Tasted neat, it demonstrates the iconic Kentucky bourbon flavours that are the result of

generations-old processes. The new variant exhibits the full-frontal signature corn mash that is the hallmark of all spirits of the brand, and the long, rich, full-bodied character that comes from ageing in #4 alligator char American oak barrels.

An amber-bronze hue, the whisky starts with a fragrant aroma of honey and caramel and kicks off on the palate with the trademark sweetness, then transforms in notes of maple and vanilla, finishing with a sharp, toasty finish. (IANS)