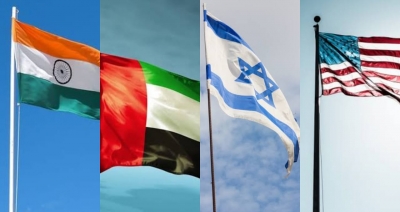 United Nations– Diplomats from the I2U2 group comprising India, Israel, the US and the United Arab Emirates (UAE) met here to discuss their economic cooperation and review their projects, according to the State Department.

The meeting on Tuesday that took place on the sidelines of the UN General Assembly was attended by India’s External Affairs Secretary for Economic Relations Dammu Ravi, US Under Secretary of State Jose Fernandez, Israeli Ministry of Foreign Affairs Director General Alon Ushpiz, the UAE’s Minister of State Ahmed bin Ali Al Sayegh.

The participants expressed their countries’ “commitment to deepening the economic partnership among the four countries”, according to the State Department.

Drawing its sci-fi-sounding name from the initials of its four member nations, the I2U2 is an innovative group that aims to leverage their shared expertise and capacities for their mutual benefit as well as to help other countries.

Taking shape in October last year, the I2U2 in the Middle East mirrors in some ways the older, established Quad group of India, Japan, Australia and the US in the Indo-Pacific region.

“The group looks forward to building on the success of the Leaders’ Summit in July,” it added.