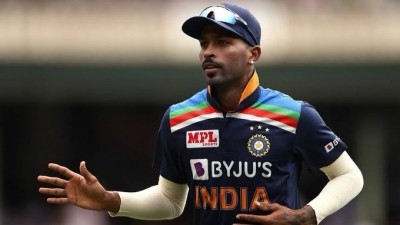 Southampton– India all-rounder Hardik Pandya revealed that during his knock of 51 against England in the first T20I at Southampton, he was looking to play risk-free cricket.

Coming at number five, Pandya slammed his maiden T20I fifty, 51 off 33 balls, laced with six fours and six as India reached 198/8 in their 20 overs.

Pandya’s day became more brighter when he took 4-33 his allotted four overs of right-arm pace, troubling the England batters with hard lengths and bowled some seam-up deliveries in between to rattle an explosive batting order, which crashed to 148 all out, giving India a 50-run win and a 1-0 lead in three-match series.

“It was very simple. It’s a conscious effort by everyone that we will make sure that we want to express ourselves and enjoy out there. It’s a great sign for Indian cricket, as all the batters showed positive intent and are going after the bowling from the second ball if possible, which is something which will help us a lot in T20 cricket.”

“Personally, I was looking to play risk-free cricket as if just one wicket had fallen, would have gone for more sixes and big shots. But I knew that the wicket was good. Batting higher up the order in the IPL has helped me in finding the gaps through which areas. I have hit sixes my whole life but scoring boundaries content my heart more now. Fours touch my heart now,” said Pandya to teammate Ishan Kishan in a video by the BCCI on their official website.

Pandya’s all-round efforts meant that he bagged Player of the Match award. But what made him happy was bowling a delivery in his spell, clocking 146 kmph, which surprised Kishan. Asked about the same, Pandya credited the hard work put in by the support staff.

“In my heart, I was happier because of when I bowled that delivery at 90.5 mph. All the credit goes to the support staff behind the scenes, especially Soham Desai and Harsha (strength and conditioning coaches), who have worked non-stop and make sure to prepare us for the matches after the Ireland series.”

Pandya then revealed that he skipped the practice T20s against Derbyshire and Northamptonshire to work on his fitness levels.

“I did not take a break after the Ireland tour. I trained hard for six days. I only worked on the skills in training yesterday as before that it was gym and running. In that block of six days, the specific training I did, as players, we get credit for our good performance. But I think behind the scenes, more credit should go to our trainers, masseurs and physios, especially Soham and Harsha should get a lot of credit.”

Pandya signed off by advising cricketers who aspire to play for India in future to work hard and be a good human being with clear intentions. “Keep working hard without thinking about the result. Everything is good now, but I get happiness from the hard work I did for myself and not for the results. The result is a byproduct, which is a result of the success in hardwork put behind by you. I would want to tell them to keep a clear intention in life.”

“Try to be a good person and work hard. When your mind is clear, you take better decisions. When you start wishing good things for your teammates, your competitors and even people whom you don’t like, it doesn’t matter how difficult time it is in life, you will come out on top.” (IANS)