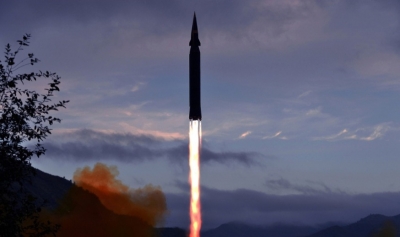 New Delhi– US politicians warned they are on course to lose a ‘new Cold War’ following reports China secretly flew a nuclear-capable missile around the world, Daily Mail reported.

The Long March hypersonic rocket, which can travel at five times the speed of sound, is said to have touched down 24 miles from its target during a test flight in August. Beijing has played down the row, claiming the launch was just a ‘routine test’ of a new ‘space vehicle’.

Yet US disarmament ambassador Robert Wood on Monday said they were ‘very concerned’, adding: “We don’t know how we can defend against that type of technology”, the report said.

Congressman Mike Gallagher blasted the US government for ‘complacency’, saying: “This test should serve as a call to action. If we stick to our current course… we will lose the new Cold War.”

“This test should serve as a call to action. If we stick to our current complacent course — or place our hopes in bankrupt buzzwords like “integrated deterrence” — we will lose the New Cold War with Communist China within the decade”, he added.

“The People’s Liberation Army now has an increasingly credible capability to undermine our missile defenses and threaten the American homeland with both conventional and nuclear strikes. Even more disturbing is the fact that American technology has contributed to the PLA’s hypersonic missile program”, he said.

“We must end joint ventures, investments, and research collaborations that involve areas associated with Military-Civil Fusion. We also need to stop the flow of Wall Street capital into Chinese tech.

Until Monday morning, few people outside of the military, intelligence and security services, and the defence industry had heard of hypersonic missiles or had a clue as to what they were or their significance.

The revelation that China has tested such a missile – and that it was nuclear-capable – has sent shock waves around the world, Daily Mail reported.

“China is not alone but it has shown it is far more advanced than the West suspected. Now Washington and other world capitals are waking up to the implications of Beijing possessing a missile that can circle the globe at five times the speed of sound – and can sneak under the radar of US anti-missile defences”, the report said.

In the space of a week that complacency has been rocked to its core. Even before the news of the Chinese hypersonic test, Nicolas Chaillan, the Pentagon’s former chief software officer, warned that Beijing is heading for global dominance because of its advances in artificial intelligence (AI), machine learning and cyber capabilities – and that gap was growing, the report said.

Global Times reported that Chinese experts said that the West is getting nervous as they have underestimated China’s space capability for a very long time. So when China shows its advanced space technology – even though it’s for peaceful use – some Western media will try to hype the “China threat theory,” because they believe that as long as non-Western countries acquire advanced space technology, the US’ hegemony in using space for non-peaceful purposes will be threatened.

“If the US launches a space arms race, non-Western powers like China and Russia would be forced to turn their advanced capabilities into military use for strategic deterrence and self-defense, experts said”, Global Times reported.(IANS)