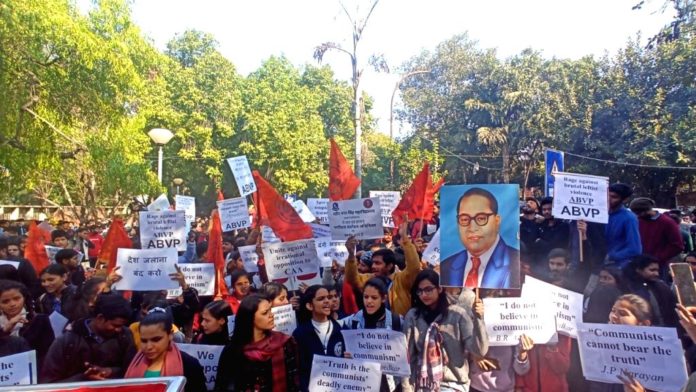 The march started from the Arts faculty in DU’s North Campus and went through the campus Law Centre, Ramjas College, Kirorimal College, Hansraj College and Daulatram College before concluding near the statue of Swami Vivekananda in the Arts faculty.

Students participating in the march demanded legal action against those involved in violence on JNU campus and condemned the Left’s act of violent opposition to opinions opposed to them.

Nidhi Tripathi, National General Secretary, ABVP, said, “Students across numerous educational institutions are coming out in support of the CAA. It needs to be highlighted that the Left and the political parties in opposition have conspired to create a violent atmosphere in the country by spreading lies and misinformation about the CAA.”

“These parties and the people involved in violence need to understand that democracy requires dialogue and has no space for such violent activities,” she added.

A joint statement issued by DUSU President Akshit Dahiya and Joint Secretary Shivangi Kharwal said, “Indian universities have always been a space for dissent and discussion, but the Left has always been violent towards people with a different opinion.

“The Left and the opposition have been trying to manipulate the students and use them as a weapon in their fight to regain lost political ground.” (IANS)