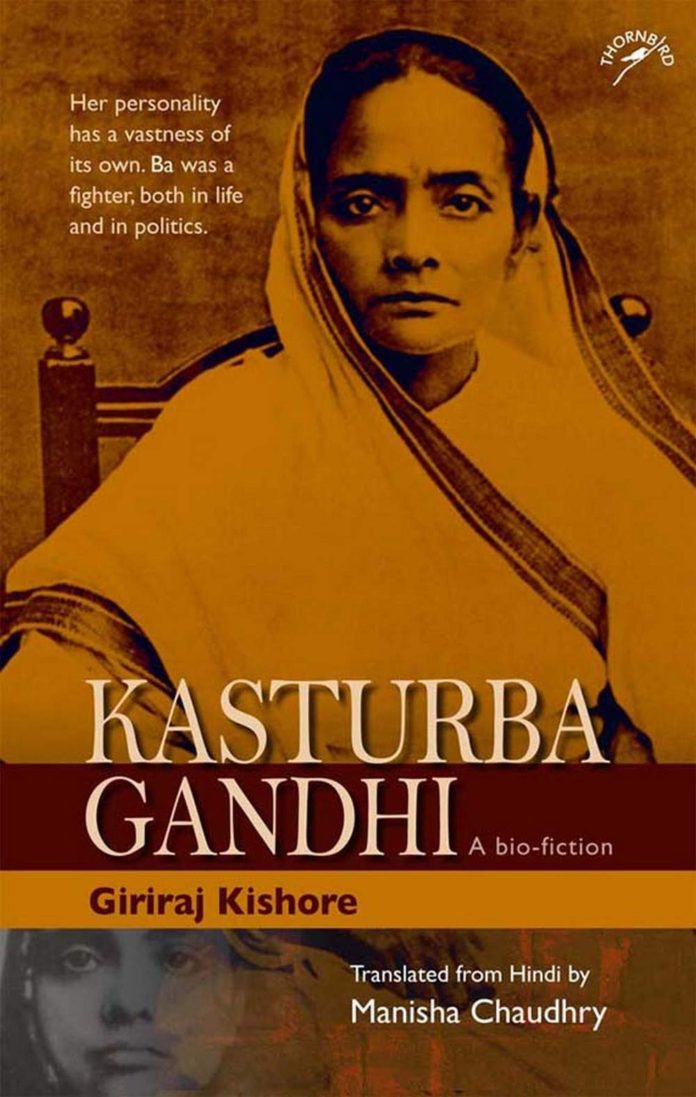 The woman who silently and patiently stood by the Father of the Nation, supporting Mahatma Gandhi’s grand plans to free India from colonial rule, as well as his quirky habits, finally finds a voice in Giriraj Kishore’s book “Kasturba Gandhi”.

Translated by Manisha Chaudhry from the author’s novel originally written in Hindi, a fictional biography of the woman in whose companionship Gandhi scripted chapter and verse of India’s freedom struggle, puts a much-needed spotlight on Kasturba’s life, which is more often than not relegated to virtual anonymity in comparison to the attention and focus on the life and deeds of her husband.

The fictionalised work, weaves in and out of her real life, tries to build context and accentuates the substance which the Porbandar-born “Ba” was really made up of.

Especially in the light of the fact that while Bapu sacrificed immensely for the country and earned his legacy, Kasturba in some ways sacrificed much more, both for the country as well as for her husband, and yet remained relegated to the fringes of history and popular attention.

The fictionalised biography covers her entire life, right from the time she is growing up as Kastur Makanji, a neighbour of the Gandhi family in Porbandar in the 19th century, when many Gujaratis looked to the Africa continent for trade, especially in cotton.

After her marriage at 14 to the man who would shape the destiny of then British-ruled India, the book first drops anchor in Africa, where she earns the distinction of being the first Indian woman to face a jail sentence on foreign soil in her fight for basic rights for Indian women.

Interestingly, while the book largely focuses on the personality of Kasturba Gandhi, it also provides a perspective on the role Gandhi played as a man with his family, his relationship with his wife, his children and the role he played as a father — one which has been under scrutiny in the past.

The subtle conflicts between Kasturba, a quiet, devoted wife, and Mohandas, the consummate selfless saint, are well put across by the author, the anecdote (fictional or not) about how Gandhi eventually came to drink goat’s milk being a case in point.

Kishore builds up the context to the goat milk episode with the dilemma faced by Ba, arising out of Gandhi’s extreme positions.

“Ba was losing her fortitude. Bapu’s refusal to eat, not taking his chosen medicine, a second time, the doctor’s refusing to endorse his belief that he was going to die… all this was nothing but an exercise in self-flagellation. The person who could transform others to believe in non-violence was committing violence on his own heart and mind. Kasturba was also suffering this violence in her own way.”

The author then writes about a spell of illness which Gandhi had suffered, which had left him weak and in need of an operation. But according to the doctor, the operation could only be conducted after he regained a prescribed level of fitness, which required Gandhi to drink milk. However, Gandhi had in the past vowed against drinking milk on account of the violence inflicted by the dairy industry on milch cows.

The tactful and earthy Kasturba, however, had a way out of the pickle, which would help Gandhi keep his vow, but also ensure that some amount of milk would find its way into his malnourished body, so that he could carry on his struggle for satyagraha.

“Due to cruelty towards milch cows by the people in the dairy trade, he had taken a vow not to drink milk years ago. Nobody had been able to break his view. As Bapu spoke, Ba’s mind raced. After a pause she said calmly. ‘Fine, you will not have any objections to drinking goat’s milk?'”

The doctor caught on: “Yes, goat’s milk will be fine”.

For a moment, Bapu was nonplussed. He dug deep. Once more, he felt his life partner had stumped him with her normalcy. When he had vowed not to drink milk, goat’s milk had not figured in his calculations. He had only been thinking of cow’s milk. So he could consume goat’s milk keeping the vow intact. He would be able to start the satyagraha movement. Just the thought of that brought a surge of energy.

That evening Bapu had his first glass of goat’s milk.

The book provides the reader an interesting take on an era about which a lot has already been written about, but rarely from the perspective of those who played a vital role in the making of modern Indian history, albeit from the sidelines. (IANS)