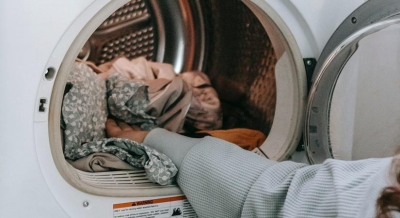 London– Drying a load of laundry using a machine dryer that uses no heat but just tumbles the cloth to remove moisture releases potentially harmful microfibres into the air, finds a study.

Researchers from Northumbria University, working in partnership with scientists at consumer goods giant Procter and Gamble on the study, measured the volume of microfibres released during washing, as well as those captured in lint filters when tumble dried.

The study, published in the scientific journal PLOS ONE, found that domestic dryers produce comparable quantities of microfibres that could be released to the air as seen going into our water systems from a standard washing cycle.

The team found the use of fabric conditioners and dryer sheets, especially in combination, could significantly reduce microfibre release from tumble dryers. And lint filters with smaller pores would trap larger masses, resulting in far fewer microfibres being released into the air.

They also found that lint filters were better at capturing polyester fibres than cotton fibres, meaning that most microfibers released into the air by dryers are likely to be cotton.

The team measured the quantity of microfibres released during the washing and drying of clothing both polyester and cotton. The research spanned both European and North American products and washing conditions and involved over 1,200 garments.

“By measuring microfibres released during the whole laundering process we found that microfibre loss through domestic drying is a huge concern,” Dr Kelly Sheridan, an expert in textile fibres at Northumbria, said.

“It is critical to our understanding of the impact of microfibres on human health and the environment that all the potential pathways for microfibre release, including air, are assessed. Airborne fibres are just as concerning as those present in wastewater,” Sheridan added.

The findings are a call to action for the appliance industry to improve the efficiency of fibre filtration systems in vented dryers and drive the conversion to condenser dryers with no airborne fibre release, especially super energy efficient heat pump dryers, the researchers said. (IANS)