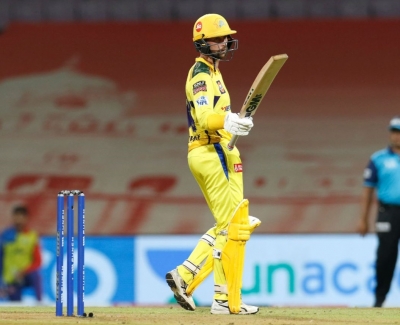 Mumbai– Chennai Super Kings’ charismatic batter Devon Conway has emerged at the saviour of the defending champions as they rally from the bottom half of the table and make a renewed bid to make the playoff of IPL 2022.

The prolific run-getter from New Zealand was missing from the earlier part of the tournament this year but since his arrival in Mumbai, he has become a star for the four-time champions, who have seen quite a bit of turmoil this season. CSK were off to one of their worst starts in the tournament’s history with Ravindra Jadeja handing over the captaincy reins back to Mahendra Singh Dhoni after a series of reverses.

On Sunday, CSK defeated Delhi Capitals by 91 runs, with left-hander Conway being outstanding during his 87 off 49 deliveries as he emerged ‘Player of the Match’.

Conway revealed that he prefers to keep things simple, adding that a bit of advice from captain Dhoni on how to play the sweep shot had worked wonders for his batting.

“The thought process was just about keeping it simple. It was just about communicating with (opener) Ruturaj (Gaikwad). With (batting coach Mike) Hussey, I just discussed about how the surface would be and who the bowlers would be to target. I am just happy to build that partnership up with Rutu (Gaikwad), and the way he’s playing, he makes my job easier. I have to be true to myself, authentic to myself. I look to play cricket shots and just assess where to put my foot down. I have to give credit to MS, because I got out trying to play the sweep in the last game, and he told me to look to play straight,” said Conway.

This was the left-handed Conway’s third successive half-century for CSK this season as his clinical batting helped the defending champions post a mammoth 208/6 on the board.

The most impressive thing about Conway’s knock on Sunday was the way he rotated the strike and kept himself busy during his stay in the middle. Out of the 49 deliveries that he faced, there were just 10 dots, according to chennaisuperkings.com. And, four of the dot balls came in the first five deliveries he faced in his innings. Once he got got his eye in, Conway kept himself busy, either by running or via boundaries.

Conway’s ability against spin came to the fore when he used his feet and the crease in fine fashion against the spinners. He got going, hitting Axar Patel for two consecutive sixes in the fifth over. He then clobbered Kuldeep Yadav, using the sweep and inside-out shot over extra cover to good effect.

Against Axar, he smashed 17 runs off the nine balls he faced, scoring two maximums, while against Kuldeep’s spin, the 30-year-old had 37 runs off 10 deliveries, including four boundaries and three sixes.

Another important facet of Conway’s batting was that he paced his innings and complemented Gaikwad.

In the encounter against Sunrisers Hyderabad, the New Zealander had paced his innings superbly and put on a sensational partnership of 182 runs with Gaikwad. In that game, Conway’s first 28 runs came off 26 deliveries. He was happy to play second fiddle when Gaikwad went after the bowling at the other end.

However, once he got his eye in, the New Zealander cut loose. His next 57 runs came off just 29 balls.

A similar scenario unfolded against Delhi Capitals on Sunday. The left-hand batter’s first 14 runs came off 13 deliveries, but once Conway settled down, he switched gears, scoring his next 73 runs off just 36 deliveries.

“Devon Conway was so good. His strokeplay through the leg side, through the off side was brilliant. The other thing is the ability to rotate strike, and he targeted the shorter boundaries really well,” said South African great Graeme Smith to Star Sports after the match. (IANS)