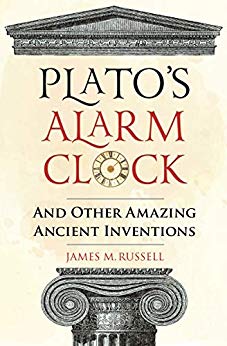 Ancient inventions like the calendar, alarm clock, umbrella, locks and keys, cutlery, adhesives and anaesthetics, among several others, make their appearance in our lives quite frequently, but most of us know little about how these inventions came to be.

Calendars of various sorts, for instance, existed during the Bronze Age but one recent archaeological finding from Scotland suggests that they were in use much before that. The site at Craithes Castle in Aberdeenshire contained a series of 12 pits, which show the phases of the moon and monitor lunar months.

“The pits, which have been dated to 10,000 years ago, also align with the mid-winter sunrise. This would allow the hunter-gatherers who created them to reset each year correctly to align with the seasons, which suggests significant levels of understanding and sophistication in the pre-agricultural Mesolithic period of the area,” James M. Russell writes in his just-released “Plato’s Alarm Clock and Other Amazing Ancient Inventions”.

As for the Water Alarm Clock, Greek philosopher Plato wanted a way to get himself and his students out of bed in time for lessons. By then simple water clocks, in which the drip of water is used to record the passing of time, were already in existence. The innovation in Plato’s water clock was that it also featured an alarm.

Plato achieved this feat by adding a tube which led out of the vessel into a lower receptacle, which was completely closed except for a few small openings designed to act as a whistle when air was forced through them — which happened when the water fell.

“So Plato’s students were woken up, along with their teacher, by a loud whistling noise emanating from the extraordinary alarm clock,” notes Russell.

The first umbrellas, on the other hand, came into existence due to climatic needs. They were used as sunshades as the most advanced civilisations developed in warmer climates.

Locks and keys are also a fascinating historical development, symbolising both the growth of personal wealth and the need for privacy. The oldest lock, according to Russell’s findings, comes from the ruins of Ninevah, the capital of ancient Assyria.

It worked on the same principle as the locks of ancient Egypt in which pins inside the lock are lifted into a recess by the key, removing the obstruction to opening the door.

Interestingly, the first wigs came into being as ancient Egyptians were obsessed with cleanliness. They washed themselves several times a day and saw being hairless as clean and civilised. “They wore wigs to keep the sun from burning their scalps. They were made of either natural or artificial hair, and were held in place by beeswax and resin,” finds Russell.

The first pieces of cutlery developed when people started to cover the handles of stone knives with wood or skin in order to make them more comfortable to hold. Russell maintains that it is impossible to say when this practice started, but contends that knives, along with simple spoons made of hollowed out wood, seashells or flint, were surely in use from the start of the Neolithic period (about 12,000 years ago).

Divided into six chapters, the book presents dozens of similar “amazing ancient inventions” and tells the reader how they came into being. Sparingly written and to the point, “Plato’s Alarm Clock and Other Amazing Ancient Inventions” is both knowledgeable and accessible. But why does Russell want his readers to revisit them?

Perhaps because he believes that we are “not any cleverer than our ancestors”, we just have an accumulation of centuries of technological progress on which we can rely. Through this book, he intends to give the readers a perspective on the rise and fall of civilisations.

“History has its many dark ages and cataclysms during which knowledge is lost and the human condition gets worse rather than better. So how comfortable should we feel today that the technology we take for granted will still be there in 1,000 years or more,” he asks.

He is aware that, by most accounts, humankind will be out in space by then, reliant on advanced energy systems and understanding evermore the cosmos and subatomic physics.

“But perhaps that isn’t how things will be. Perhaps there’ll be a human civilisation that has evolved into something unrecognisable to us, in which there remain only few incredulous rumours about how mankind used to be able to fly to the moon and beyond, send information instantaneously around the world, cure all kinds of diseases, send aircraft and bombs across the oceans, and understand what matter is made of.”

He ends hoping that the Utopian version is the real story and the dystopian one never comes to fruition, but in the meantime he urges his readers to take a look around and appreciate every little bit of technology we use. (IANS)