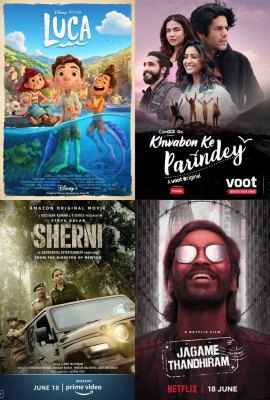 New Delhi– Here’s a look at highlight films, shows and series that are scheduled to drop in the digital space this week.

The drama series is about three friends and a stranger, and unfolds in Australia. It is a story of realisations in life through a journey of love, friendship, hope, despair, joys and sorrows.

Season five of the popular Canadian sitcom, created by Catherine Reitman, brings back Reitman along with co-stars Jessalyn Wanlim, Dani Kind and Juno Rinaldi as the working mom buddies who face a new set of challenges.

Not to be confused with the hit Korean show of the same name, this Thai show is a new rom-com about a food-blogging insurance agent who meets an old school friend and soon becomes her sidekick.

The popular children’s animation show returns in its seacond season. The pre-school series is about Daisy and Cole who solve problems in a town full of nursery rhyme characters.

The Russian period adventure film is inspired by “Romeo And Juliet” and the novel “Hans Brinker, Or The Silver Skates”. Set in Saint Petersburg during the winter of 1899it tells the story of romance that blooms between Matvey the courier and Alisa the aristocrat.

Documentary Series set in South Africa, where an endangered group of penguins flock to find mates, raise families and mix with the locals.

The Icelandic sci-fi thriller series is about how a catastrophic eruption of the sub-glacial volcano Katla turns a nearby community’s world upside down as mysteries begin to emerge from the ice.

‘Newton’ director Amit Masurkar presents Vidya Balan as as a forest officer who must lead a team of trackers and locals intending to capture an unsettled tigress, while battling intense obstacles and pressures, both natural and man-made.

The Tamil action thriller is about a clever gangster who is hired by a crime lord to take down a dangerous rival.

Pixar’s new animation film is set in the 1950s, in a seaside town on the Italian Riviera. A young boy Luca shares adventures with his new best friend Alberto. They are hiding a secret from each other — they are both sea monsters.

Season four of the Spanish suspense drama series is about a group of middle-class students who have an altercation with their wealthy and influential classmates in the elite school they enrol, which leads to a horrific murder.

The Chinese romantic drama series is about a career-driven young woman balancing workplace tension with a love triangle and a nagging mother at home.

The Japanese action drama is about Kenji, whose father died from using a stimulant drug, followimng which he joins a crime syndicate and Kenji discovers a new concept of the family.

Documentary series on Spain and Real Madrid captain, the legendary defender Sergio Ramos. The series narrates the incredible story of the football superstar who has garnered popularity the world over.

CHIVAS: EL REBENO SAGRADO, Season 1 (Series on Amazon Prime Video; June 18)
A documentary series for Latin American football buffs, about the unforgettable season of Mexico’s homegrown club, the Chivas of Guadalajara, as it resurrects the legendary team after five consecutive seasons of failure.

The Korean teenybopper drama is about a cynical youngster who is drawn into a friends-with-benefits arrangement by his flirtatious art school classmate. (IANS)