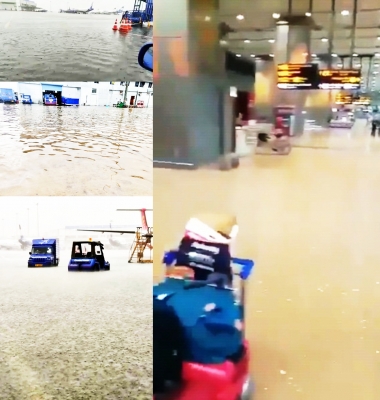 Accordingly, the arrival area of Terminal 3 was waterlogged for “half an hour” before it was cleared.

However, flight operations continued unhindered at the airport.

In a tweet, the Delhi International Airport Limited said: ” Due to sudden heavy rain, for a short period, there was waterlogging at the forecourt. Our team was immediately aligned to look into it and the issue has been resolved.”

Besides, several airlines said that inclement weather has delayed some flights.

“#6ETravelAdvisory: Due to bad weather in #Delhi, flight departures and arrivals are impacted,” IndiGo said in a tweet.

On its part, SpiceJet tweeted: “Due to bad weather in Delhi (DEL), all departures or arrivals and their consequential flights may get affected”

In addition, Vistara said: “Due to waterlogging on account of heavy rains in Delhi, traffic congestion is expected. Customers travelling are advised to allow more time for their journey to the airport. Thank you!” (IANS)