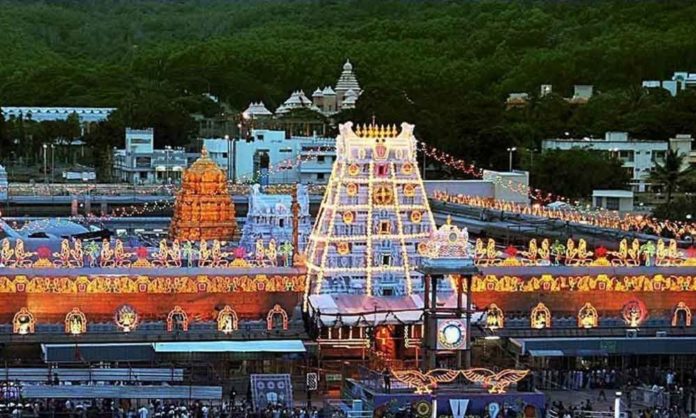 Tirupati–Some gold and silver ornaments allegedly went missing from the treasury of the , which led to the temple authorities so far recovering Rs 2.25 lakh from an official held responsible for the loss.

A five-kg silver crown and two gold items were reported to have gone missing from the treasury of the temple about two years ago but the incident came to light on Tuesday after a section of TTD employees took exception to only one official being held responsible for the incident.

Tirumala Tirupati Devasthanam (TTD), which manages the affairs of the world’s richest Hindu temple, meanwhile, assured devotees that their contributions are safe.

TTD Executive Officer Anil Kumar Singhal said all precautions and vigilant steps were taken by the TTD in the preservation of devotees’ contributions of gold and silver ornaments and others with proper documentation in the treasury.

He denied reports of laxity and carelessness in preserving the devotees’ contributions and said stringent action was taken against erring officials, if any.

He said all the devotees’ contributions were safely and systematically brought to the treasury of TTD administrative building where an Assistant Executive Officer rank official records them and keep the ornaments in lockers. “In the event of a transfer of the officials, there would be a total inspection of all items in the presence of outgoing, and incoming officials in the presence of Vigilance, the Deputy Executive Officer concerned and accounts officials,” he said.

AEO M. Srinivasulu had personally reported some shortages of ornaments worth totalling of Rs 7,36,375 as per certification of October 10, 2017, and also some additions. Among the excess items were some gold and silver ornaments, precious stones, and gold plated jewels.

The EO said after investigations, Srinivasulu was held responsible for the shortfall in the ornaments and at the rate of Rs 25,000 per month, an amount of Rs 2.25 lakh has so far been recovered from him.

He said on the appeal of the said AEO, the TTD has agreed to undertake certification once again in September next when the shortages could become more transparent.

The EO said in the event if the alleged shortlisted items were not found, the TTD would take action for the full recovery of the total amount and also initiate departmental disciplinary proceedings as well against Srinivasulu.