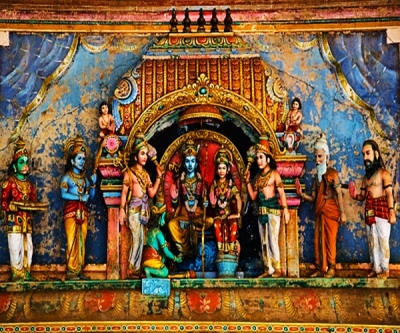 Gorakhpur– The Bhagwad Gita, Tulsi Das’ “Ramcharitmanas” and Durga Saptashati were the top selling books published by the iconic publishing house Gita Press at the Gorakhpur Mahotsav as the world tried to find a solution to the pandemic.

According to Lalmani Tiwari, production manager of Gita Press, “In comparison to last year, the sale was double this year at the Gorakhpur Mahotsav. Last year, books worth Rs 40,000 were sold, and this year, the sales crossed Rs 90,000.”

Most of the people were attracted towards Gita and the small version, priced at Rs 10, which sold more than 500 copies.

The other publications were not able to cross the sale of 1,000 books. There were more than 8 book stalls in the book fair at the Mahotsav.

A number of religious books were distributed free and the sale of Ahmadiya Muslim community books was also good.

Copies of book ‘Nath Sampraday’ written by Hazari Prasad Dwivedi were sold out within two days.

Titles including ‘Rag Darbari’ by Shrilal Shukla, ‘Rashmirathi’ by Ramdhari Singh Dinkar, ‘Kashmir and Kashmiri Pandit’ by Ashok Pandey and ‘Chitralekha’ by Bhagwati Chandra Verma continue to be much sought after.

Gorakhpur’s Gita Press is the world’s largest publisher of Hindu religious texts. It was founded in 1923 by Jaya Dayal Goyanka and Ghanshyam Das Jalan for promoting the principles of Sanatan Dharma. It has been propagating and promoting morality and spirituality through its literature throughout the world. (IANS)