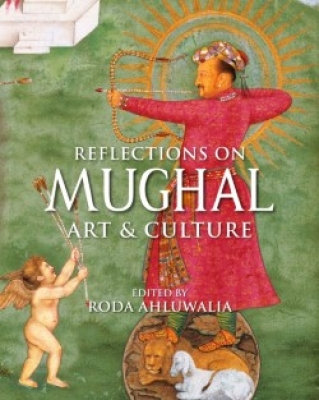 Recent scholarship in this field has offered deeper analysis into established norms, explored pan-Indian connections and drawn comparisons with contemporaneous regions of the early modern world. Further studies along these lines were encouraged in a seminar at Mumbai’s K.R. Cama Oriental Institute and the formidable scholarship presented by contributors forms the content of this volume, edited by Roda Ahluwalia, an independent scholar of South Asian Art, with an interest in painting and the book arts, religio-philosophical thought and the material culture of South Asia.

The 13 essays by internationally famous experts in the book explore varied subjects under the Mughal umbrella, challenge long-held ideas and draw comparisons between the artistic expressions and material culture of the powerful Islamicate triumvirate of the early modern period-the Safavids in Iran, the European-based Ottomans and the Mughals in the Indian subcontinent.

Themes as diverse as portraits of royal women, sub-imperial patronage of temples, word-image relationship, the lapidary arts and the Imperial Library of the Mughals (at London’s British Library) are featured in the book. Murals painted on architectural surfaces, the textile culture of the city of Burhanpur, changes in visual language and content of painting, and Imperial objects d’art have been discussed, challenged and analyzed.

The final three articles are groundbreaking comparisons across the Ottoman, Safavid and Mughal spheres. This beautifully illustrated book is sure to appeal to connoisseurs, collectors and scholars alike.

Here’s a sampling from the book:

An essay by Mika Natif focuses on Mahim Anaga, foster mother of Akbar and his advisor, and Hamida Banu, Akbar’s mother – and chief wife of Humayun.

“Muslim Kings, Hindu Temples” by Catherine Asher. Many Hindu temples were built during the time of the Mughals – by Hindu courtiers. For example, there’s the Adinath temple at Ranakpur, temples in Chittor, and temples built by Raja Man Singh (Govinda Deva Temple in Vrindavan) and Jagat Shiroman in Amber.

Gulru Necipoglu compares the Ottomans in Turkey, the Safavids in Iran and the Mughals in India – comparing large buildings such as mosques and palaces made to impress both the local people and foreign travellers.

Roda Ahluwalia is currently a visiting scholar of Jnanapravaha, Mumbai, where she lectures on Mughal, Deccani and Pahari painting for the ‘Indian Aesthetics’ programme, and a member of the Governing Board of the K.R. Cama Oriental Institute.

She previously lectured at the School of Oriental and African Studies, University of London, and was responsible for curating and tutoring an adult-education course titled ‘1500 Years of Indian Painting’ for the British Library/Birkbeck University. She has been a guest lecturer on various occasions for the Indian Art Circle, London.

She has worked with the Rajput painting and manuscript collections of the British Museum and the British Library. Among her publications are a book titled “Rajput Painting, Romantic, Divine and Courtly Art from India” (2008) and various articles on Indian Painting. She was responsible for the art historical metadata of a volume of a 17th century illustrated Ramayana manuscript from Mewar, part of a joint project between the CSMVS (Chhatrapati Shivaji Maharaj Vastu Sangrahalaya – formerly Prince of Wales Museum), Mumbai, and the British Library. She currently divides her time between Mumbai and London. (IANS)