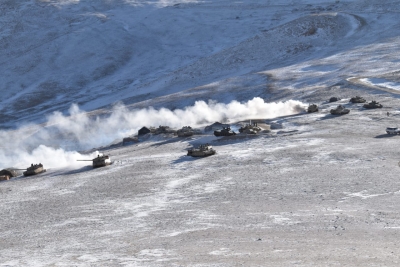 New Delhi–Former army chief Ved Prakash Malik has taken up cudgels against those who are slamming the India-China agreement on troop withdrawal from Ladakh.

“Surprised to see criticism. Mostly due to ignorance of facts or politico-military understanding or sheer prejudice,” tweeted the ex-army chief.

In his chain of tweets, Malik said that the criticism of the ongoing disengagement process at Pangong Tso, such as claims that India has ceded territories, was mostly due to ignorance of facts and politico-military understanding or sheer prejudice.

Explaining the process of disengagement of Indian and Chinese troops, Malik said that the temporary freeze on patrolling between Finger 4 and Finger 8 on the northern bank of Pangong Tso was essential to avoid clashes.

The troops around the lake are going back to pre-April 2020 locations, he wrote, referring to the understanding reached by the two countries, under which Indian soldiers will move back to their last permanent base in the Finger area, which is the Dhan Singh Thapa post of the ITBP, just short of Finger 4.

Similarly, Chinese troops will go back to their permanent post, which is beyond Finger 8 and is known as the Sirijap post.

While Indian troops are mainly based at Finger 2, the LAC is located at Finger 8. Indian troops used to travel by foot and were usually stopped by the Chinese at Finger 4 or 5. The Chinese had managed to build a road till Finger 5 during the Kargil War, and they would travel by vehicles whenever they used to see Indian foot patrols.

Indians cannot take vehicles beyond Finger 3 because the path to Finger 4 is very narrow and can be accessed only by foot.

While the Chinese claim the area till Finger 2 as their territory, they can only reach Finger 4 on land because vehicles can’t go beyond that point.

Gen Malik pointed out that on completion of the Pangong disengagement, talks for withdrawal in the Depsang Plains, Gogra, Hot Spring and Galwan are to be held within 48 hours. He added that full disengagement and de-escalation is bound to take long.

Gen Malik said that China has been “compelled to restore status quo ante” and India has been able to assert that LAC violations will affect all relations and its own border infrastructure building will continue. He also said India has strengthened itself geo-politically, strategically and economically.

Meanwhile, disengagement by the Indian army and People’s Liberation Army (PLA) on Pangong Tso has led to an easing of tensions at Naku La in Sikkim, which saw clashes between Indian and PLA soldiers last month. This incident took place at Naku La area at a height of over 5,000 metres on January 20 when Chinese soldiers attempted to intrude into the Indian territory but were pushed back. The Army clarified it was a minor face-off that was resolved by local commanders as per established protocols. The Naku La episode was the second such incident in the eastern sector in less than a year. Four Indian soldiers and seven Chinese troops suffered injuries during a May 9, 2020, confrontation that involved around 150 soldiers.

While the Modi government is tight-lipped about Naku La, Hindustan Times, after talking to top military commanders and diplomats, has learnt that the just like the Pangong Tso disengagement, the easing of tensions on Naku La has been dictated by the highest levels in Beijing with a renewed effort to build trust and normalise relations. The decision-making authority in the PLA’s case is the Central Military Commission headed by President Xi Jinping, who is also the commander-in-chief of China’s defence forces.

Quoting a former army chief, the report says: “The speed at which the PLA has moved its troops beyond Finger 8 on the north bank of Pangong Tso towards Srijap plains and beyond as well as withdrawal of no less than 220 Chinese light tanks from south banks of Pangong Tso clearly shows that the instructions have come from the highest level in Beijing.”

Government sources said the disengagement process, which began Wednesday, was not sudden but had actually been under discussion since September, the same month that the Indian and Chinese Foreign and Defence Ministers met in Russia. Since then, the sources added, there had been several rounds of discussion during which both India and China eased their stands.

Over the course of the stand-off, India and China had multiple rounds of talks at the military and diplomatic levels, but the stalemate was finally tackled during the Corps Commander dialogue last month.

According to senior military officers, Indian Army commanders raised the question of severe mistrust with their PLA counterparts, citing the continued friction at Naku La while the Pangong Tso disengagement agreement was reached on February 10. It is learnt that just to prove that the PLA was committed to genuine disengagement with the Indian Army, a battalion commander sought a meeting with his Indian counterpart at Naku La on the same day, assuring no further transgression from the Chinese side.

In Sikkim, there is agreement between India and China on aligning the border, which is essentially the watershed between the waters that flow into the Teesta, and those into the Amo Chu and other rivers in Tibet.

But as of now the border has not actually been demarcated on the ground. As it is, there have been issues in the so-called Finger Area to the east of Naku La. The Chinese have been contesting the boundary in the north-eastern arc of Sikkim, because this is in an area where terrain allows India to deploy armoured units that can threaten the roads connecting Tibet to the Chumbi Valley.

The challenge for India is to counter this effort and given the demands of manning the LAC in the same manner we do the Line of Control with Pakistan, it is not going to be easy. (IANS)