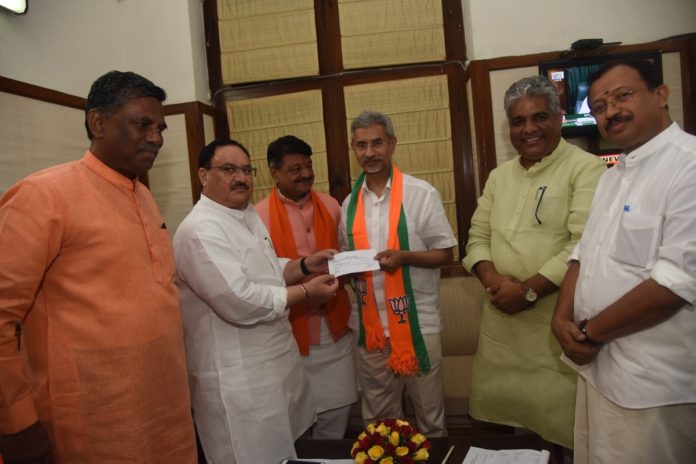 New Delhi–External Affairs Minister S. Jaishankar formally joined the BJP on Monday, nearly a month after being inducted into the Cabinet in a surprise move by Prime Minister Narendra Modi.

The 64-year-old former Foreign Secretary was welcomed into the party by BJP Working President J.P. Nadda at the party office here.

Jaishankar, who played a key role in shaping the foreign policy of Prime Minister Narendra Modi’s first term, was inducted into the Cabinet and given the important portfolio of External Affairs on May 30, when the new Council of Ministers was sworn in.

As of now, he is not a member of either House of Parliament.

The 1977-batch officer has served in various capacities in the Ministry of External Affairs and as Indian envoy in important countries such as the US and China at crucial times.

He was the Foreign Secretary from January 2015 to January 2018 and played a key role in shaping Modi’s foreign policy during his first term, which saw a significant growth and expansion of India’s ties with key countries, particularly the US and Arab nations.

Prior to that, during this tenure as India’s Ambassador to the US from September 2013 till taking over as the Foreign Secretary, he played a major role in bringing the US Administration and the Modi government closer.

He also planned and executed a highly successful maiden visit of Prime Minister Modi to the US in September 2014 and his landmark address to the Indian diaspora at the Madison Square in New York.

A major highlight of his diplomatic career was his tenure as Joint Secretary in-charge of Americas Division from 2004 to2007, during he was involved in negotiating the historic civil nuclear agreement which was finalized in 2006.

He also led the Indian team of negotiators for the subsequent 123 Agreement, with the US, which was linked to the civil nuclear deal and concluded in 2009.

Jaishankar, who was honoured with India’s fourth highest civilian award Padma Shri in January this year, also played a key role in improving the defence cooperation between India and the US in the shape of a new framework.

Jaishankar’s tenure as India’s Ambassador to China from 2009 to 2013, which was the longest by any IFS officer, coincided with several major developments in relations between the two countries.

It was his briefing to the Cabinet Committee on Security in 2010 regarding China’s refusal to issue a visa to the Northern Army Commander which led to suspension of Indian defence co-operation with China and military exercises, before the matter was resolved in April 2011.

Also in 2010, Jaishankar negotiated an end to the Chinese policy of issuing stapled visas to Indians from Jammu and Kashmir.