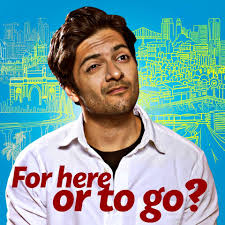 “For Here or To Go” is director Rucha Humnabadkar’s debut feature film that highlights the anguish of immigrants who are trying to settle in America. It resonates the feelings of most Indian Americans who are frustrated with the US immigration restrictions and are pained with the thought of moving back to India.

This light-hearted comedy drama is set against the backdrop of the 2008 recession and aftermath of the 2011 episode that made immigration laws more stringent and the plight of the immigrant more acute.

The narrative is seen through the eyes of Vivek Pandit, a young, Mumbai born, Silicon Valley software professional who is allured by the American Dream. The film concentrates on the tumultuous period when he is hoping to switch jobs and is unable to do so because of his visa status, despite spending about seven and a half years of his life in America.

It is just “simple paper work” he is often reminded, but this means a lot and it keeps him on tenterhooks. Just as he gets mentally ready to return to India, he falls in love and his struggles surface once again.

While he is battling his own issues, his eyes are opened to the similar residency issues of his roommates and other immigrants who are equally seen as “temporary, alien workers” in the US. He realises how they lead comfortable lives but avoid investing in assets in that country for fear of having to leave it all behind.

The writing by Rishi S. Bhilawadikar is sincerely honest and touches your heart at several instances. It aptly captures the flavour of “ABCD” – American Born Confused Desi, DCBA – Desi Confused By America and FDIA – Frustrated Desi in America”.

In short, the writing brings to the fore “personal choices” and “how it feels to run out of options”. It encapsulates the voices of those 1.5 million Indian immigrants working in the US.

Ali Fazal as Vivek Pandit is charming. He displays his cheerfulness and despondency with equal fervour. Melanie Chandra as Vivek’s love interest Shweta is natural and equally charismatic. Omi Vaidya as the south Indian Laxminarayan is good but stereotyped. But it is Amitosh Nagpal as Vivek’s Punjabi roommate Amit who keeps the ball rolling with his unrestrained, spontaneous and brash performance that provides comic relief to the otherwise glum atmosphere.

Mounted astutely with moderate production values, the film will definitely appeal to non-resident Indians or cinema lovers who are keen about cross-over films.