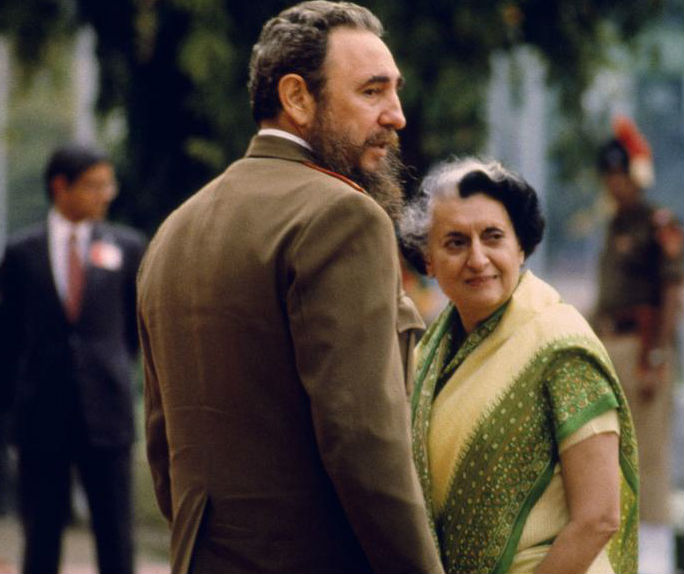 New Delhi– Fidel Castro, the iconic Cuban revolutionary leader who died on Friday, will be remembered in India for his close association with the Nehru-Gandhi family and especially his “sisterly” ties with former Indian Prime Minister Indira Gandhi – which he sealed with a bear hug during the Non-Aligned Summit in New Delhi in 1983.

At the inauguration of the Seventh Non-Aligned Summit, March 7-12, 1983 at Vigyan Bhavan, that was attended by a record number of over 100 heads of state and government, Castro, who headed the Cuban delegation, announced that, as host of the previous summit in Havana in 1979, he was happy and proud to pass the conference gavel to his “sister” Indira Gandhi.

Both then rose from behind the podium, watched by several hundred delegates, that included observers of leading countries who were not members of the Non-Aligned Movement (NAM), and a huge assembly of mediapersons.

As both came to face each other, Gandhi expectantly extended her arm to receive the big wooden gavel. But Castro did not reciprocate. Gandhi, a trifle taken aback, extended her arm a second time, but Castro again failed to respond but kept smiling mysteriously.

As a slightly embarrassed Gandhi proffered her hand a trifle hesitatingly a third time, Castro pulled a surprised Gandhi to him and gave her a giant bear hug in full view of the hall, before parting with the gavel.

The whole hall broke into huge applause, Gandhi was momentarily left flushed in the face, but the bear hug moment was recorded by all for posterity.

That was Castro’s last visit to India.(IANS)