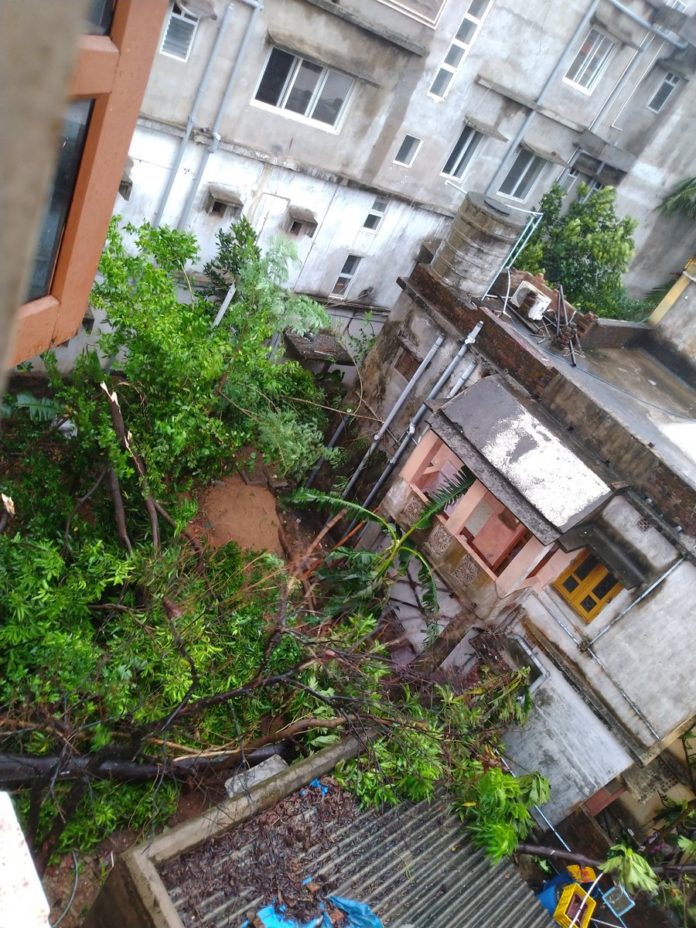 Kolkata– Cyclone Fani, one of the strongest storms to batter the Indian subcontinent in decades, uprooted trees and triggered rains as it entered West Bengal post midnight on Saturday, hours after making landfall and causing havoc in Odisha on Friday.

No loss of life or any injury has been reported so far.

According to the Meteorological department, the extremely severe cyclonic storm relatively weakened after entering coastal Odisha and transformed into “very severe” as it approached Bengal.

The storm is now lying close to Arambagh in Hooghly district, and is 40 km west of Kolkata.

“It is likely to continue further in north, north east direction, and reach the east Burdwan-Hooghly border, and through Nadia go to Bangladesh on Saturday afternoon, weakening into a cyclonic storm, after having triggered rains,” Bandyopadhyay said.

Fani lashed cities and towns in coastal Bengal including Digha, Mandarmani, Tajpur, Sandehskhali and Contai while the effects of the storm could also be felt in cities like Kharagpur and Burdwan as trees were uprooted and metal hoardings gave way.

Parts of Kolkata and the suburbs also received moderate to heavy rainfall since Friday afternoon.

The epicentre of the storm is expected to hit the city in the early hours on Saturday.

The rains would continue till early Saturday.

In the sea resort of Digha, the win speed reached 70 kmph in some areas, in Frazerganj the wind velocity was between 60 and 70 kmph.

Kharagpur has so far recorded 95 mm rainfall, which will continue for the next two to three hours.

“The rains will continue till early morning on Saturday, and the weather will start improving by evening,” he said.

The administration has switched off electricity to prevent any accident as the storm passed through a particular point in the state.  (IANS)