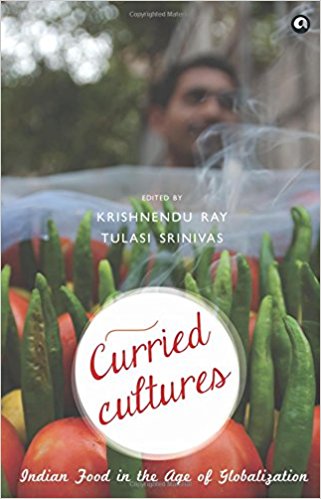 Bengaluru– Though its origin isn’t exactly Indian, chicken tikka masala has strangely epitomised Indian food across the world, and has remained a hackneyed icon.

And, despite having a huge history of food in our country, an often misunderstood “curry” is all that comes to mind globally when one talks about Indian food. This makes one wonder how certain dishes get world recognition, even as many Indians remain oblivious to them.

A recently-released book “Curried Cultures: Indian Food in the Age of Globalisation” (Aleph Book Company; 316pp; Rs 499) looks at Indian food through the lens of the process of globalisation and the transformation it went through as a result of the economic integration with the world.

The editors, Krishnendu Ray and Tulasi Srinivas, have put together the works of many authors on how culinary cultures of South Asia have been influenced by globalisation, nation-making, nation-breaking and more.

US-based authors and researchers in food studies, Ray and Srinivas, who had met at an academic conference in Toronto a few years ago, realised that there was very little of South Asian food in scholarly literature and decided to put together the book.

“Curried Cultures” was originally published by the University of California Press in 2012 and has now been reissued to reach a wider audience, the editors shared.

“While one could eat South Asian food just about anywhere in the world, it is rarely referred to in scholarly literature. We wanted to correct that imbalance; to join palatal taste to the rich discussion in the humanistic social sciences on aesthetics,” Ray and Srinivas told IANS in an email interview.

“The West no longer dominates the world political-economically or in terms of cultural production. ‘Curried Cultures’ was our way to engage with that great transformation from South Asia to the rest of the world,” they added.

Right from colonial times, which brought together the Hindu, Mughal and English customs to royal dining tables, to the birth of fast food in the country, the book traces the long journey that Indian food has taken over the years and the reinventions in Indian kitchens along the way.

The book is not only about the history of food, nor is it only about curry, the authors assert.

“We wanted to provide historical depth to the contemporary focus on food, to underline the fact that cultural globalisation is an old phenomenon with many new characteristics,” Ray added.

The culture of fusion food and combining food elements of different cultures comes right from the time of our great grandmothers, who took vegetables from South America and cooked them along with the spices from the hinterland of India, he said.

“Curried Cultures” also delves into caste structures and the expansion of Udupi hotels not just across the country but the world. These hotels were begun by the Brahmins from Udupi, a southwestern district of Karnataka, and had “separate dining sections for Brahmins till late 1960s and excluded Dalits”, a chapter in the book says.

While many Indians eat on-the-go, grabbing their bites often from one of the American fast-food chains, India is “far from becoming a fast-food nation”, according to one of the chapters.

“As the companies salivate at the new, huge untapped Indian market, the Indian culinary cultures and the related substantial business interests reassert to control their markets,” it adds.

Globalisation has helped in strengthening some of the local forms of culture, the editors believe.

“We do not think Indian food loses identity, it merely changes sometimes for the better, incorporating new and more diverse ingredients and processes. Due to globalisation, various street foods and chaats from India have been recognised as Indian food. Nearly all food is global,” they conclude. (IANS)