The findings—from an international team including Harvard T.H. Chan School of Public Health—add to the roughly 100 known breast cancer risk regions in the human genome, providing information that could help identify women at high risk of breast cancer as well as guidance for further research on the biology of breast cancer development and progression.

“These studies implicate many previously unsuspected genes and genetic mechanisms in breast carcinogenesis,” said Peter Kraft, professor of epidemiology and a co-senior author of both studies. “The findings could be used to identify women at high risk of breast cancer who might benefit from more intensive breast-cancer screening or other risk-reducing strategies.” 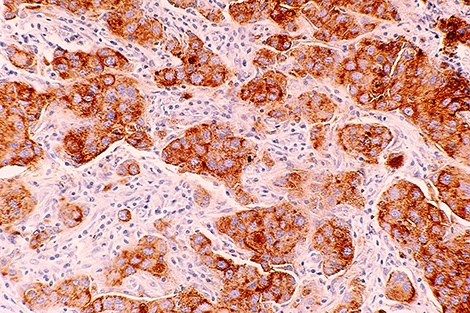 Breast cancer is the most commonly diagnosed non-skin cancer and the second-leading cancer killer among U.S. women. There is a strong inherited familial component to the disease. For instance, a woman whose sister has been diagnosed with breast cancer has about a twofold increased risk of getting breast cancer herself, relative to average risk among all women. Rare, high-risk mutations in genes such as BRCA1 and BRCA2—the best-known genes linked to breast cancer risk—have been found to account for less than 25% of the shared risk within families. Another hundred genetic variants found in previous genome-wide association studies are linked with small changes in breast cancer risk and explain some, but not all, of the remaining family-related clustering.

The new research involved nearly 230,000 women of European descent, about half of whom had been diagnosed with breast cancer. Each of the newly identified variants only has a modest effect on breast cancer risk when looked at individually. But when looked at together they can help identify a small but meaningful proportion of women at high risk of breast cancer, Kraft said.

The studies also found some genetic regions that are associated specifically with estrogen-receptor positive breast cancer (in which estrogen may promote the growth of cancer cells) and some that are associated specifically with estrogen-receptor negative breast cancer—underscoring the fact that these are biologically distinct cancers that develop differently.

“These new studies make clear how much of the familial risk of breast cancer remains to be explained, despite everything we’ve learned,” Kraft said. “We are still on the steep part of the discovery curve when it comes to identifying common variants individually associated with small differences in breast cancer risk.”