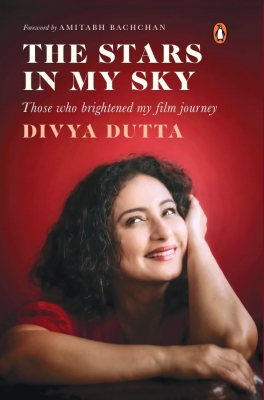 Mumbai– National Award-winning actress Divya Dutta, who is all set to release her second book ‘The Stars In My Sky’, recalls her first meeting with Bollywood superstar Shah Rukh Khan. She also shares how painful it was for her to revisit the memories of actor Irrfan Khan post his sudden demise.

In a conversation with IANS, Divya shared that the idea behind writing the book that is filled with memories of some of the iconic filmstars, including the late Rishi Kapoor, late Irrfan Khan, Shah Rukh Khan, Amitabh Bachchan, Shabana Azmi, Gulzar, Rakeysh Omprakash Mehra – was to express her gratitude towards these people who contributed to her journey as an acting professional.

Revisiting the chapter on Shah Rukh Khan from the book, Divya told IANS : “I think Shah Rukh is one of the most charming and compassionate human beings I have ever come across; he has a very deep caring nature, especially towards youngsters, towards newcomers because he understands where we are coming from.”

“I wanted to do ‘Dil Se’ and I wanted to meet him regarding that. He was shooting in Delhi and thousands of people gathered to see him. Eventually, when I met him in the car escorted by his manager, he was so sweet to me, talked to me very politely and also offered me a cup of tea. See, these are small things and being a superstar, he might not have done any of this and I would have still been okay with it. But SRK really knows how to treat people with respect.”

The actress added, “Even though we could not work in ‘Dil Se’, one of the big breaks that I got that gave me a lot of recognition was ‘Veer Zaara’ and that is when we worked together. When I was revisiting those memories of us working together or even now when I am talking about it, I am smiling…because that is the effect SRK leaves on you. He makes you smile even in his absence.”

The book ‘The Stars In My Sky’ was also an interesting exercise for her to understand the power of the subconscious mind.

“When I sat down and started thinking about when I first met any of the personalities I have written about, it was so magical. At times, we forget some of the little details of a bigger incident but when we sit down to write, we realise that everything we are experiencing, remains in our subconscious mind. It all surfaces in a miraculous way,” she said.

Divya, who acted with Irrfan Khan in films like ‘Aaja Naach Le’ and ‘Hisss’, mentioned how painful it was for her to revisit the memories of the late actor and that his sudden demise was almost like a personal loss.

“I think that is why it is so important for us to say our friends and family more than often how much they mean to us, how much we love them. We have done films together but more than that, Irrfan was a very extraordinary human being. So as co-actors the time that we spent brought a smile to my face because that is how I want to remember him.”

“As a co-actor, he added so much to my craft. When I met him for the last time, I actually did not know that that was the last time we are meeting…he also came to our house on one of my birthdays where our other colleagues and friends were present. None of us ever imagined Irrfan will leave us so suddenly. It feels like ‘Koi aapna tha, jo chala gaya…'” Divya signed off.

The book ‘The Stars In My Sky’ is published by Penguin Random House India and the foreward is written by Amitabh Bachchan. (IANS)